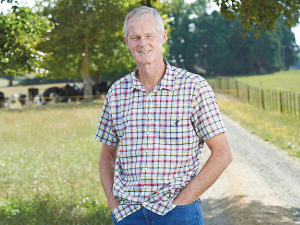 A big majority of 1794 submissions received by DairyNZ on the biosecurity response levy were supportive.

Sixty-one percent of submissions from farmers backed DairyNZ managing the levy on their behalf and raising the maximum cap to 3.9 cents/kgMS. That totalled 1088 supportive submissions and 706 against.

“We appreciated the candid conversations and the opportunity to discuss not just the proposed levy, but also DairyNZ more widely,” DairyNZ chair Jim van der Poel says in a letter to farmers.

He says the next step will be a recommendation to the Ministry for Primary Industries and he will communicate with farmers again this Friday (March 29) to confirm the approach they will take.

The strongest themes, by far, during the consultation were general support for the levy and wanting DairyNZ to have a seat at the table instead of a mandated biosecurity levy under the Biosecurity Act, DairyNZ says. Also discussed was whether farmers were already paying too much and other queries about the levy.

“There was some confusion about the maximum amount versus what would be implemented, and for how long that was to be applied,” says DairyNZ.

“The cap sets the maximum levy rate. The rationale is to pay back what we currently owe, and then to match the levy with the same timeframe as costs are being incurred.”

By setting the maximum, farmers are not agreeing to an ongoing levy at that rate. The rate will be notified annually prior to implementation.

Another theme was parity with other sectors and who should and should not have to pay.

“The beef and dairy split was raised a number of times at the farmer meetings.  The 94% / 6% was recommended by an independent panel, as dairy is most impacted by the clinical impacts of the disease and therefore the reduction in income from the disease.

“Beef + Lamb NZ has promised that the beef levy will only be levied on the beef sector, not on dairy cull cows.

“The dairy biosecurity response levy will be set at milksolids, so the split between sharemilkers and owners will be the same as the milk cheque split; this is the fairest way to apportion the levy as this is a production/income-based disease.

Thumbs down on eradication

A number of the negative responses were due to the belief that eradication, and the way it is tracking, is not worth pursuing.

“There is a lot of misinformation about the eradication process and the success to date,” says DairyNZ.

“While it is extremely difficult for anyone involved, and systems and process can be and are being improved, the actual results achieved by the programme are more positive than even the technical advisory group was expecting.

“The spring bulk milk testing, for example, confirmed that the disease is not endemic and wide-spread throughout New Zealand, and led to only three new properties being identified as positive for M. bovis, and a small number of low-risk farms being put on further surveillance.

“This could have been much more widespread; we were expecting more properties to be identified by the testing programme. The testing is complex, but the layering of tests gives a strong level of comfort that eradication is still possible.”