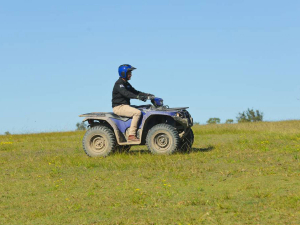 Federated Farmers is backing a recommendation that crush protection device (CPD) be installed on quad bikes used for work.

For some time Federated Farmers has been saying CPDs, or roll over protection as it used to be called, can be a very useful injury prevention option in many - but not all - farm settings," Feds president Katie Milne says.

This week Worksafe announced it strongly recommends the use of crush protection devices (CPDs) on the back of quad bikes.

Crush protection devices can be fitted to a quad bike to provide a survivable space should a rider be pinned underneath it. Between January 2000 and October 2017, 81 people have been killed in quad bike accidents while at work and an average of five people die in work-related quad bike incidents every year.

“Data reveals that these accidents can happen on almost any part of the property – and to experienced and inexperienced riders. In many of the incidents the worker is crushed or unable to escape due to the weight of the bike, contributing to fatal or life-changing injuries,” said WorkSafe’s general manager of better regulation and legal Mike Hargreaves.

Milne says Feds is on board with WorkSafe’s decision.

"There is still some debate about CPDs, including from quad bike manufacturers who say they are unsafe, and those who say the device itself can cause injury in some circumstances.

“But like WorkSafe, Federated Farmers believes there is now enough evidence from credible sources to say that farmers should at least be considering Crush Protection Devices.

"Of all quad deaths about 90% are the result of asphyxiation as a result of the bike pinning the rider in a roll over incident. The net result of greater use of CPDs is likely to be positive," Milne says.

Quad bikes are vital tools on farms and in many situations they are either the only, or the safest, vehicle for the job. But they can be unforgiving in the event of a mistake and CPDs are a possible step to make those mistakes less costly.

In 2014, WorkSafe said fitting CPDs was a matter of personal choice. A subsequent review of research and the lack of improvement in incident numbers have prompted the regulator to revise that position.

“It’s our view that CPDs are likely to prevent serious and fatal injuries.

“It’s important that farmers and others don’t treat these as a fit and forget solution. The devices do not take the place of training, maintenance, protective gear, vehicle selection, or the careful use of quad bikes, but they can provide some protection in the event of rollover,” said Hargreaves.