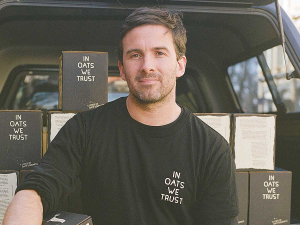 Launched nine months ago and initially supplied to a few Dunedin cafes, its Otis Oat Milk brand is now sold in 150 cafes throughout New Zealand. This year the company hopes to treble the number of New Zealand cafes it supplies, move into supermarkets, and initiate sales in Australia.

To achieve that, they plan to establish the country’s first processing facility for plant-based dairy alternatives, with an initial production capacity of 25 million litres per year.

The company’s co-founder, Chris Wilkie, said conventional wisdom might say they should build nearer the big Auckland market but they are conducting a feasibility study on a site in Dunedin.

“We want to be a pro-farmer brand and a pro-farmer company so we going to build at the bottom of the South Island,” said Wilkie.

Wilkie started the company a couple of years ago with managing director Tim Ryan. Both men are from farming backgrounds but are back in New Zealand after several years overseas. Now running a small cattle farm in South Wairarapa, Wilkie said that when they started the oat milk company he thought it might be an opportunity for him to move into plant-based agriculture.

“We’ve learned a lot and I think farming really is about using the right land for the right purpose and the right land for growing oats is down the bottom of the South Island. That’s where all our oats for human consumption comes from, Southland and Otago.”

The factory’s oat supply would continue to be via the Harraways mill in Dunedin.

Wilkie said while they could try to broker with farmers directly, they wanted to make “really healthy partnerships” and had no intention to break that supply chain.

The long-established Harraways was a great company and “true southern brand,” he said.

“The hero ingredient is the New Zealand oat. We grow, we believe, the best oat in the world and have been for a long time.”

Ryan says their expansion plans are in response to growing demand.

“Demand has exceeded our expectations so we’re going to expand our productive capacity and distribution to make oat milk more accessible to Kiwis and then take it to the world.”

“The feedback we’ve been getting from our wholesale café networks, and the general public, has been really positive. We’re getting calls every day from Kiwis wanting to know when they can start buying Otis in supermarkets.  We’ll have some good news for them on that front in the coming months,” said Ryan.

They also see significant growth potential in Asia, especially given the prevalence of lactose intolerance in that region.