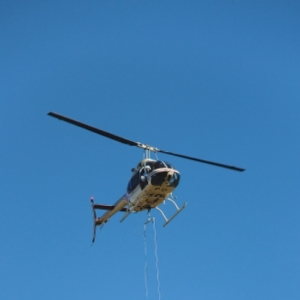 THE WAIKATO REGIONAL Council has confirmed it will suspend use of helicopters for monitoring dairy farm effluent compliance pending a review of its methods for checking farmers are working within the rules to protect waterways.

The decision follows an earlier recommendation from the environmental performance committee for a halt to the flights, pending such a review, after it heard about the stress helicopter monitoring caused farmers.

The council also agreed to establish a working party, with nominated representatives from the dairy leaders forum and councillors Alan Livingston, Clyde Graf and Stuart Husband.

The working party has been tasked with investigating the various options for monitoring farm effluent systems and bringing a recommendation back to the council within four months identifying the best options to undertake regular monitoring.

In past years, the council used helicopter flights to randomly monitor farms in the region to see if they were compliant with environmental rules. The helicopter flights were seen as an efficient way to cover farms and identify those where on-ground follow-up inspections might be necessary to determine whether effluent run off into waterways was occurring, the council says in a statement.

In more recent years, however, the council has taken a more targeted approach, with flights only over areas where soil conditions mean effluent is more likely to get into water. Staff look from the air to see who has obvious signs of effluent discharges to water so compliance activities can be focused on them and the fixing of discharges which contribute to water pollution.

All other farms flown over then receive an on the ground visit at an appointed time to help ensure their effluent systems can comply with rules all year round, especially during winter's wetter weather. Farmers have been advised about effluent system design companies for help if they need to make effluent system improvements. There has been positive feedback from farmers on this advisory approach.

A staff report to the full council meeting noted that, besides helicopter flights and on-the-ground inspections and advisory work, the council was working closely with the dairy industry and others to improve farmer compliance with environmental protection rules.

The current helicopter flights would mean one aerial inspection per farm every six years. It was estimated that 100 farms could be inspected from the air in the same time it would take to conduct ground-based inspections of one or two farms.

Staff felt that ground-based inspections by prior appointment alone was unlikely to be as effective in detecting rule breaches as helicopter use. The report said ground only inspections could mean increased costs, fewer farm inspections overall, more unannounced ground-based visits and more inconvenience for farmers.

"Ceasing using the helicopter at the present time is likely to mean that the very small proportion of farmers who deliberately seek to hide significant non-compliance are much less likely to be caught," the report said.

After the meeting, council chair Paula Southgate said that, whatever the outcome of the review, it was important for the dairy sector, farmers and the council to continue all the positive work they were doing together to protect the health of waterways from effluent.

"The dairy sector and individual farmers deserve a great deal of credit for the effort they have put into lifting environmental performance in recent years. As we work through the review process, it is critical that we keep our eye on the need to protect our rivers, streams and lakes. Their health is very important to all our communities."