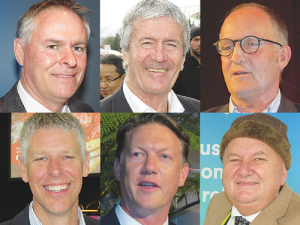 As we bid farewell to another year it’s time for the annual review of 2018 in the primary sector as seen by the Rural News editorial team.

The great start award: to outgoing Zespri chairman Peter McBride for his level-headed, down-to-earth approach on taking up Fonterra directorship. An independent thinker and experienced hand. Is he the next Fonterra chair in waiting?

The Lazarus award:  she’s back! Leonie Guiney is back on the Fonterra board after being unceremoniously dumped last year as Fonterra’s ‘independent’ selection panel declined to choose her to stand again. This time Guiney self-nominated and went direct to shareholders who voted her back.

Thank God he’s there award: agriculture Minister Damien O’Connor. The coalition Government is not overly-endowed with many pro-farming types. However, O’Connor has proven to be a pragmatic minister and strong advocate for the sector. His efforts in getting Government backing for the fight against M.bovis is a good example of this.

Miraka the Maori dairy company at Taupo has given real meaning to the word excellence. It won the Maori agribusiness award for being a top employer and also has a great incentive system in place for its suppliers -- Te Ara Miraka.

Beef + Lamb NZ is certainly giving its levy payers excellent value for money. Working in collaboration with the Meat Industry Association it is protecting NZ’s interests in Europe as Britain makes a clumsy exit from the EU. Both chairman Andrew Morrison and chief executive Sam McIvor have not held back in telling the Europeans to honour the WTO deal on sheepmeat access to the EU and UK.

The hort sector, with the rise and rise of the kiwifruit industry, helped along by pipfruit and spuds no less. But will Aucklanders ever get the fact that taking productive land for housing is pushing up the price of their fruit and vegetables? Probably not.

NZ has many great farmers, but we’d like to single out dairy farmer Trevor Hamilton who will never get on the board of Fonterra because he asks questions -- hard, honest questions -- and is not one of the ‘old boys’. Ben Allomes is another model farmer and won best employer gong. He and wife Nicky are great farming leaders and role models.

The ‘WTF’ award: for everyone involved in climate change-affected agricultural policy-making: for conflicting statements, nil clarity and completely leaving farmers in the dark.

The knock-out award: former Associate Agriculture Minister Meka Whaitiri. After getting too pushy with her staff, Whaitiri was unceremoniously dumped by the PM and her associate ag portfolio has not been assigned to anyone else. It seems the ag portfolio – like the former minister’s staff member – has been left a ‘punching bag’ for Whatiri’s appalling behaviour.

Cracked-record awards: another year and yet again Greenpeace, the Green Party, Fish and Game, SAFE and the usual coterie of anti-farming PhD types have continued their relentless attacks on the sector. Let’s face it, these groups hate farming and will not be happy until all farming in NZ is shut down. The groups are fast losing credibility – if they ever had it.

Past its use-by date: the entity formerly known as Landcorp – now Pamu Farms – is losing the support of the farming sector quicker than its pathetic returns on capital. The state farmer is not only spending taxpayer funds on giving farming critics such as Mike Joy, Marnie Prickett and Anna-Beth Cohen cushy jobs, but is even now overtly political in publicly advocating for capital gains and water and nitrogen taxes. It’s time it was sold.

Buying votes: while there is merit in the Government’s much-vaunted Provincial Growth Fund aimed at funding worthy projects in provincial NZ, there are legitimate questions over the management of the PGF by Shane Jones. This has not been helped by the bulk of the fund being spent in Northland where Jones and Winston Peters are trying to build NZ First’s base. However, the decision to extend struggling dairy co-op Westland Milk a sweetheart loan of $10 million – without any public scrutiny – sounds alarm bells about the lack of analysis about how this fund is being used.

How the mighty have fallen: in past years, when Lain Jager was heading Zespri, – he was a regular fixture on the annual ‘good’ list. However, 2018 has not been a stellar year for the former kiwifruit boss. He now heads up the highly questionable and ineffective $500,000-a-year Primary Sector Council, which has taken the saying ‘All hui, no doey’ to new levels. If the PSC had been a bull or a ram, this expensive white-elephant would have been culled long ago.

Sour milk: Fonterra... where do we start? In 2018, Fonterra recorded its first loss in history, continually kept dropping its forecast payout for the current season, lost both its chair and chief executive and then had to re-run its director elections due to the archaic and confusing rules it has governing director votes. 2019 can’t come round quick enough for the dairy co-op.

Golden goodbye: former Fonterra chief executive Theo Spierings left the co-op in a hurry and a mess yet he is rumoured to have collected a golden-parachute payment of about $8 million. Who wouldn’t want a job like that?

How low can it go: strong wool prices continue to tumble. It now costs more to harvest one kilo of crossbred wool than grow it. Ag Minister Damien O’Connor has set up yet another talking heads group to look at improving prices. However, one suspects the Wool Working Group will be as ineffective and impotent at doing anything about wool prices as his Primary Sector Council is in setting the agenda in the ag sector. Thankfully fine wool prices are looking good and the future for this fibre looks bright.

Bloody bogan awards: those laggard farmers who still pollute waterways and treat their animals and staff badly. They destroy the reputational capital of NZ Inc.