The traffic light fruit which has wooed the world 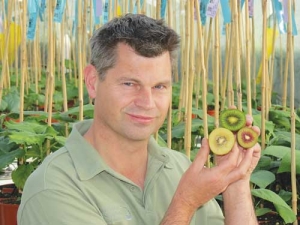 When Chinese gooseberries were introduced into New Zealand in 1904 they were a novelty crop. Today kiwifruit is a billion-dollar export earner – and still rising, due, in part, to the work of plant breeders such as Dr Bryan Parkes.

It took until 1959 for New Zealand to rename the Chinese gooseberry ‘kiwifruit’ and make the product its own.

Over the years and through trials and tribulations, including PSa, this fuzzy berry has become a large chunk of the NZ economy.  Some call it the ‘traffic light’ industry -- traditional green fruit complemented now by gold and red.

The rise-and-rise of kiwifruit is no accident: it’s the product of a carefully orchestrated plant breeding programme now involving the marketer Zespri and Plant and Food Research, plus growers and other industry professionals.

According to scientist Bryan Parkes, the game plan of Zespri and Plant and Food is plant breeding to create new products to underpin the industry’s future. This requires new cultivars with amazing fruit that keeps attracting consumers.

Parkes says the process effectively starts when the seeds from two elite ‘parents’ are joined, then 12 years may pass before cultivars can be released to growers for commercial production. A further two years will pass before consumer taste the final product.

Uppermost in the minds of Zespri and Plant and Food – at the very start of the process – is trying to decide what the consumer will want in 14 years.

“We do a lot of work on consumer psychology and demographics today and what they may expect them to be in the future,” Parkes told Rural News. “The key drivers are amazing flavour, visually attractiveness, colourful fruit and convenience.

“That is one half of the equation; the other is that the cultivars we produce also must be quite high yielding, disease tolerant, store well and easily handled through the supply chain. And then the product also has to be desired by the consumers.”
Taste is an interesting issue, says Parkes. There are ‘cultural’ tastes: people talk about the Germanic central Europe group more comfortable with a sweat-sour balance, whereas the Asian palate generally prefers an intense sweetness.

“But you can’t be too general about that because the Spanish love sweet as well. So there is a cultural factor, but there is behind it all a desire for sweetness and intensity of flavour and we see that trend increasing across the world,” he adds.

The science behind the development of new kiwifruit varieties is huge. Plant and Food has upwards of 1000 scientists around the country working on the project -- expert in fundamental biology, plant growth, genetics, fruit handling and storage and consumer understanding.

Then there are plant breeders who develop and grow the new cultivars. It’s the combined knowledge of this group – with input from Zespri and growers – that produces the product that woos the consumers.

“We ultimately work out what we can do genetically and what the consumers wants,” Parkes explains.

“Then we work through a large funnel starting with 100,000 potential cultivars and the experts bring them down to a narrower brief. At that point, we start to share the 20-50 individual cultivars we might take forward to the next stage of evaluation. Over time, the funnel gets narrower and narrower, but ultimately the consumers and growers tell us what the answer is.”

The answer lies in what Parkes calls the ‘agronomics’ or evaluation of the fruit through an extensive process of test marketing. They may be able to produce a kiwifruit the consumer loves, but if it can’t be supplied at a reasonable price the idea is canned.

“It can go the other way around – an amazing fruit from an agronomics perspective -- but large volumes of fruit the consumer doesn’t want to buy also doesn’t work. So we have to have both work.”

A major part of the process in developing new varieties of kiwifruit is interacting with growers. This begins when they start doing clonal tests – taking cuttings from the original seed and spreading them to different locations in NZ and offshore.

“The next point is when we run commercial trials, on quarter-hectare blocks and all done with growers on growers’ sites. The grower gets to apply his mastery of kiwifruit growing and gets to learn how to grow each cultivar, because it’s like trying to learn to drive a new car. Every cultivar has its own behaviour so we get the expertise of the growers and they work as a group, almost a club, with each other on how best to drive a particular cultivar.”

The ability of the kiwifruit industry to go from strength can be sheeted back to the genetic material imported from China in the 1970’s and 80’s. Parkes says this will enable the industry to continue its development into the future. It’s no longer possible to import new genetic material as new regulations are still being written.

Parkes believes the combination of skills of plant breeders, growers and marketers of kiwifruit are producing a rich economic legacy for NZ.  From the basic Hayward green kiwifruit has evolved the gold kiwifruit and now the red is in the development state, and there is more to come.

“It’s about repeating the process over and over. We expect to go through generations of new greens and golds and red kiwifruit,” Parkes adds.

“Because of the length of the development, we have to plan generations in advance so we are constantly looking for the next generation that will ultimately replace the last generation that’s better in every way.

“It’s a process that never stops for the next generation of kiwifruit.”