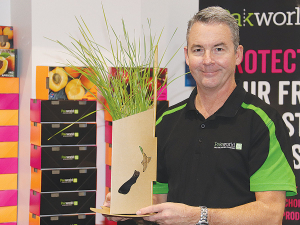 Jonathan Flett says the tree protectors are designed to prevent animals such as rabbits and hares from attacking and damaging young trees.

Pakworld, originally a family-owned business, makes cardboard boxes in which are packed everything from cosmetics to alcohol - and cherries for the horticultural sector.

Jonathan Flett, who was one of the original owners and still works for Pakworld, says seeing the plastic tree protectors occurred at the same time as the Government was rolling out its large tree planting programme. He told Rural News they realised that they could produce a tree protector from cardboard, which was sustainable and naturally biodegradable.

The protectors are designed to prevent animals such as rabbits and hares from attacking and damaging young trees until they are established - be this in a forest or alongside a highway. Flett says they quickly desinged their own cardboard protector and it's been a winner.

"With the plastic protectors, the grower has to go out into the forest and pick up the plastic because it is not biodegradable," he explains. "But with the cardboard product, it will last for between 18 months and two years and will then naturally rot into the soil."

Incorporated into the tree protectors is a small weed mat, which slides around the base of the small newly planted tree and prevents it from being overcome by weeds. The weed mat also has a small hole in it, which allows for a stake to put alongside the tree.

"When we are making the main protector, we use the off-cut from this to make the weed mat so there is little wastage," says Flett.

He admits the idea of the cardboard protector is not new and understands that similar products are manufactured and used in Europe.

On a general note, Flett says they are noticing that discerning customers and consumers are favouring cardboard packaging over plastic. He says people want to do their bit for the environment and using recyclable and biodegradable packaging is one way of doing this.