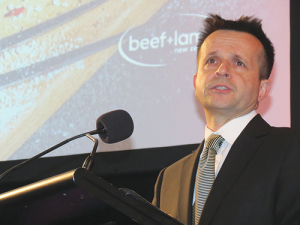 An absolute nonsense, unnecessary, premature, puzzling, and is our so-called friend the UK doing the dirty on us?

Such were the reactions to news that Britain and the European Union plan to split the tariff-rate quota (TRQs) which regulate how much lamb and beef NZ may send to the UK and EU on a 50:50 basis when Britain leaves the EU.

This is as opposed to the present flexible arrangement that NZ has with the EU, which allows us complete flexibility as to the amount of lamb we send to specific countries in the EU – including Britain. NZ currently has quota of 225,000 tonnes of lamb, and quotas for beef and dairy to the European Union.

This latest missive from London and Brussels, which results from the protracted and fractious Brexit negotiations, was the major talking point at last week’s Red Meat Sector conference held in Napier.

Open anger flared at the cavalier way the EU and Britain are treating NZ. There was also a threat that if they didn’t retain the present flexible arrangement, NZ would take legal action against the pair to preserve its rights, emboldened in the agreement with the WTO.

The Ministry of Foreign Affairs and Trade (MFAT) top trade negotiator Vangelis Vitalis told the conference that the proposed TRQ split would diminish NZ’s access to both the UK and EU markets and would effectively reduce the ability of NZ firms to respond to market demand. He says they would be locked into a particular level in both markets and this would remove necessary and commonsense flexibility.

“Under the present arrangement, if British consumers want more lamb we can respond and the same would apply to French, Greek or German consumers,” Vitalis told the conference. “This is particularly so at certain times of the year and that’s why the present system is so important. This latest unilateral step is a troubling one.”

He says the UK and the EU have been very good politically at telling us that no third country will be worse off because of Breixt. However, Vitalis says, we’ll have to see how that works, but right now it’s very difficult to see how that can be achieved if they are going to unilaterally reduce our access.

“It feels very difficult to be effectively negotiating in a context where we don’t know what the relationship between the UK and EU will be because the Brexit negotiations are still ongoing. Yet despite this we are being asked to change our relationship with them before we know what this will be.”

Vitalis told Rural News that NZ negotiators have already made a counter proposal on the TRQs, which would provide more flexibility. He points out that NZ is not wanting greater access to the EU and UK, just what it has now which is supposedly guaranteed under the WTO rules.

It could get worse!

There is potential for this whole international trade situation to get worse.

Vangelis Vitalis talked about the problems of the appeal body at the WTO potentially heading down the road to collapse, of a threat of trade wars, and of disagreements between nations threatening to break down the present rule-based system of trade.

Brexit, Trump, China and a host of new political agendas continue to disrupt the order that has sat in place for many years. He says to New Zealand the UK and EU are vital markets and the present uncertainty is unwelcome.

“The EU and UK keep telling us they care about the international law-based system, that they don’t agree with President Trump’s unilateral move,” Vitalis said.