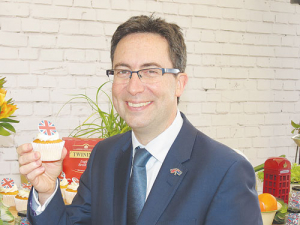 Britain is probably New Zealand’s greatest supporter of it getting a free trade agreement (FTA) with the European Union (EU).

That’s the assurance from the UK’s High Commissioner to NZ, Jonathan Sinclair, who says as long as his country is a member of the EU it will support negotiations for an EU-NZ FTA, which he expects will start later this year.

Sinclair says even when Britain leaves the EU it will still be a strong proponent of free trade.

“Around the world there are not many countries like NZ, the UK and Singapore who are unabashed free traders,” he told Rural News.

“We don’t know how the negotiations between the EU and UK will go and then what the NZ - UK arrangement will be. But we do know that globally we have a common desire to push the boundaries of free trade and that’s where companies here in NZ can benefit from that push.”

Sinclair says the very close ties between the UK and NZ help underpin a relationship that incorporates trade and other links.

He says NZ gets a good deal from the UK in the number of Kiwis allowed into Britain on various work schemes.

Regarding an NZ - UK FTA, Sinclair says many complex negotiations must be held with the EU. Legally Britain has to leave the EU by March 2019.

“Until then the UK cannot negotiate with anyone else because the European Commission retains the ‘competence’ for free trade negotiations. But the UK and its closest friends have talked about what future trading relations might look like once we leave and that is perfectly legitimate.”

Sinclair says no decisions have been taken on what a UK - NZ FTA will look like and whether NZ will be first in the queue to negotiate a deal. But he says the UK government is grateful for the assistance and advice NZ has given them to set up a department of international trade.