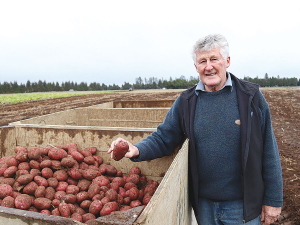 Ohakune’s Ron Few and his family have built up a huge farming business which includes growing carrots and potatoes.

Peter Burke reports on a vegetable grower who has helped enhance the town's great reputation.

Since then, he and his family have built up a huge farming business which includes growing carrots and potatoes. They also have a dairy farm and a large sheep and beef property running 25,000 breeding ewes and 650 breeding cows.

In total, the Frews farm 4000ha and have 18 people working on their various properties.

The carrot operation is run by Ron’s son Peter who grows between 15-20ha of carrots every year. Most are sold to an Auckland company, Fresh Direct, and some to Speirs in Marton. Small lots also go to Turners and Growers in Hastings and Tauranga.

According to Frew, carrots are relatively easy to grow and are prolific croppers, but there is a very high reject rate.

“The highest pack-out rate you will achieve in the season is around 70%, but normally pack-out rates are in the range of 50-60% of harvested tonnage,” he told Hort News. “In our case, all the rejects are fed out to our own livestock.”

Frew has seen huge advances in technology and new varieties of seed, which make the growing of these vegetables much easier and scientific.

“In the early days [of planting] we had the ‘Ohakune carrot tin’ – an old baking soda tin with holes in it set into a frame,” he explains.

“Now we all have precision air seeders and you can basically plant whatever number of seeds to the hectare that you want. In our case we sow about a million seeds per hectare.”

But it’s potatoes that dominate Frew’s commercial growing operation. Each year, they plant about 100ha in spuds to be sold as washed potatoes to the Foodstuffs supermarket chain and other independent retailers.

Both crops are planted October to December and are harvested February to September.

Frews maintain their huge land holding because carrots and potatoes cannot be grown in the same ground year after year because of the risk of disease, poor yields and a huge drop in quality. Ten years may pass before another crop of carrots or potatoes can be grown in the same piece of land. Swede, brussel sprouts, kale or oats usually follow – with additional years in pasture.

“When you wash a potato like we do you expose every skin blemish, and skin finish is paramount when you are potatoes for washing,” Frew explains. “If you crop successively, you very quickly get a build-up of soil pathogens which ruin the quality of the crop.”

He says some growers in NZ do grow potatoes or carrots in the same place in successive years, but he believes that in his case a long rotation is the answer.

Climate change is notable in Ohakune. In the past, the cold winter temperatures have been important to the Frew family’s operation, as the cold ground essentially operates as a fridge or a cold store.

But in recent years, says Frew, warm spells have caused regrowth of the potatoes left in the ground and not eaten by sheep or cattle.

Consent process does not wash

As for most growers, crop washing is an integral part of the Frew business.

The Frews have a washing and grading set-up which services all the carrots and potatoes they grow. Their simple system ran successfully for 30 years without any complaints from Horizons Regional Council, but this all changed when they were required to renew their consent.

The issue is that during the washing process, the soil off the carrots and potatoes has to be separated from the water and settled before being spread back on the land

Frew says the consent process got bloody ridiculous. “When we came to renew our consent, Horizons were so busy they employed a consultant to do that work and it was like starting from scratch all over again,” he told Hort News.

“We had to show that what we were doing was ok and this took us weeks. We then had to photograph the whole plant and explain every single little detail.

“It should have been just an automatic consent renewal because we had no received no abatement notices. I guess that’s how it is in the world we live in now.”

Frew says he now employs his daughter full time as an administrator to handle mainly compliance issues on their farms.

“Not a week goes by when someone comes to tell us what to do and many of these people have never been on a farm. This is becoming an industry in its own right,” he claims.