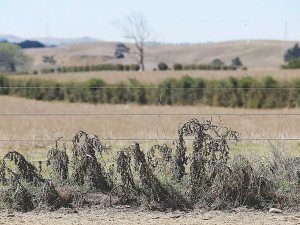 Northland is prone to drought.

The dairy co-operative carted water from its milk processing site to the field days.

Phillips says they are keeping a close eye on the situation again this year.

“While there are water restrictions in place, water is always a tricky issue for us,” he told Rural News.

“If water restrictions are imposed before the event, then we’ll look at ways we can truck in water to the grounds.”

The Northland Regional Council says bouts of timely rainfall mean this summer has been ‘kinder’ to many Northlanders than last year’s prolonged drought. However, with much of summer and autumn still to come, authorities say it’s still sensible to save water where possible.

Colin Dall, the Northland Regional Council’s group manager regulatory services, says when viewed as a whole, the weather around the region, to date, was collectively what could loosely be called a ‘typical’ Northland summer in terms of overall rainfall.

“Coming into this summer, spring was drier than usual,” he explained. “As was the first official month of summer, December, with western areas and Kaitaia receiving around 30% of typical rainfall, and the east coast receiving around 10%”.

“Aside from the obvious financial cost of buying in the water people need, tank refills also have potential environmental costs,” she says. “This puts pressure on supplies in other areas, reducing water in streams and rivers and potentially affecting aquatic habitats.”

Similarly, those who sourced their water from groundwater supplies had a similar role to play as ‘not all aquifers are created equal’.

McHugh says, regionally, aquifer levels are lower than usual – again largely the legacy of last year’s prolonged drought – and were being monitored closely by the regional council.

“Typically aquifer levels decline over summer and reach their lowest levels in autumn before recharging over the wetter months.”

McHugh says while some aquifers are able to cope over the dry months, others were more susceptible to saline (seawater) intrusion, particularly those in small coastal areas.

Of the several hundred people or organisations which do have regional council resource consents in Northland, some holders have already had to cease their takes due to rivers reaching low flows, that was not uncommon over summer.

"The regional council has also recently started engaging with other water users in areas where river and groundwater flows are likely to reach low flow limits in the near future. Again, this is common during summer," he told Rural News.

Dall says if necessary, the regional council can impose formal water rationing and/or water shortage directions as tools for managing water takes in dry catchments. However, this is not something it has had to resort to this summer thus far.

He says the region's district councils had already proactively introduced water use restrictions in susceptible areas in recent weeks, including both the Kaipara and in the Far North.