What does TPP mean for NZ agri? 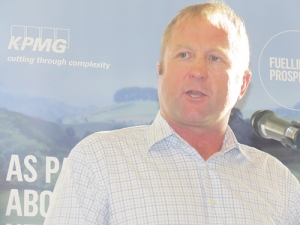 David Anderson spoke with New Zealand's special agricultural trade envoy Mike Petersen and others about what TPP will mean for the NZ agri sector....

With the ink barely dry on the TPP agreement, Mike Petersen, fresh from Atlanta, where the deal was signed, was in North Canterbury talking to farmers about coping with drought.

Invariably, the TPP deal also came up for discussion and Petersen, NZ's special agricultural trade envoy for the last few years and a regular attendee at TPP and other trade negotiations over this time, spoke passionately about the benefits of the deal to NZ and the agriculture sector in particular.

There is little doubt NZ's primary sector – with the notable exception of dairy – has come out of the TPP agreement well. It provides for the complete elimination of tariffs on most of NZ's key primary sector exports to TPP nations – except dairy and some beef to Japan.

"We were never going to get want we wanted for dairy," Petersen told Rural News.

"The reality is that as far back as a year ago it was clear we were never going to get complete tariff reductions on dairy from Canada, the US and Japan.

"Unfortunately the Aussies did not stand with us over dairy in Atlanta. Their focus was on sugar, biologics and other matters," Petersen says. "If we'd had the Aussies onside we'd have got a better dairy deal, but it was too hard with just [NZ] against the combined and heavily protected dairy sectors of the US, Canada and Japan."

Despite the less-than-ideal outcome for dairy, Petersen believes the TPP has delivered an "outstanding" result for the NZ primary sector.

"It is an outstanding deal for NZ. We have basically gained free trade access for the majority of our primary sector products – with the exception of dairy and some beef – to 11 new markets with a population of 800 million or 40% of the world's trade.

"We now have access to 11 new markets tariff-free for fruit and veg, sheepmeat, seafood, wine and forestry, and the next best thing for beef."

Petersen's optimistic view of the TPP is shared by many in the primary sectors bodies that have gained from the agreement.

For other agricultural products there are some very positive gains, which can be welcomed by farmers.

"Beef farmers will be happy Japan's tariff will drop from 38.5% to 9% over 15 years, which should put us back on a level playing field with Australia and make a material difference to NZ exports," says Stephen Jacobi executive director of the NZ International Business Forum.

He adds that the TPP has a range of other useful wins for the NZ primary including:

"This deal will help improve the competitiveness of our exports by removing tens of millions of dollars of tariff costs," says BLNZ chief executive Scott Champion.

"The TPP will open up these (TPP) markets and will see the removal of tariff costs for all beef and sheepmeat products, with the exception of Japan," says MIA chief Tim Ritchie.

"The US is NZ's number-one market for beef, both by volume and value, earning $1.57 billion in the year ending June 2015," he adds. "Current trade is under a quota system attracting a US4.4c/kg tariff. This will be eliminated. Meanwhile, Japanese beef tariffs will not be eliminated, but will be significantly reduced from as high as 50% to 9% over time."

Horticulture New Zealand president Julian Raine says the most critical result in the deal for NZ horticulture exporters is the reduction of tariffs to Japan.

"This will have a significant impact on the earnings of growers of kiwifruit, buttercup squash, capsicum, onions and virtually all other horticulture exports to Japan," he says. "Japan is NZ horticulture's third largest market and the elimination of tariffs will benefit NZ producers by an estimated $28 million per year."

Kiwifruit producers have also welcomed the deal which will eliminate tariffs on kiwifruit exports into all 12 Asia-Pacific nations when it comes into force. Zespri chief executive Lain Jager believes the most immediate impact will be in Japan.

"In 2014, the industry paid over $15 million in tariffs into Japan which is Zespri's largest country market. If this tariff relief was passed straight through to NZ growers it would equate to savings of over $1000 for every hectare of kiwifruit grown in NZ."

Even the dairy sector, while disappointed by the eventual final outcome, has grudgingly admitted the industry is better off with these minor gains than none at all.

"The dairy outcome, while disappointing for farmers and for anyone involved in TPP over the last seven years, needs to be seen for what it is: the best that could be done, in the face of entrenched protectionism and anti-competitive reflexes in the world's largest economies especially the US, Japan and Canada," says Jacobi.

Fonterra chair John Wilson described the deal as "a small, but significant step forward for the dairy sector".

Petersen agrees the dairy deal was less than ideal, but says this mainly relates to "old world" products such as wholemilk powder and butter – where the protectionist dairy lobbies of Canada, and US again fought reforms.

"But if you look in the area of infant formula, where tariffs will be totally eliminated over 10 years, there is huge potential for NZ dairy and in an area where many of our dairy companies are focussing."

Petersen says the TPP has basically opened up free access for all our primary products – with the exception of dairy and some beef – to markets with 40% of the world's GDP and 800 million people. This we could or would never achieve without the TPP.

"This process – the TPP – gives us free-trade access with countries we could never expect to gain bilateral deals with: the US, Japan, Mexico and Canada.

"It also means we have access to five new markets – the US, Canada, Singapore, Brunei and Japan – all of which have higher spending and earnings than NZ. That opens up huge opportunities for us."

Meanwhile, Petersen has special praise for the team of agricultural negotiators from MFAT and MPI who he says have done NZ proud.

"People won't know who they are, or even their second names, but David, Fiona and John are hidden gems who have done an incredible job advancing NZ's primary sector trade."

But Petersen knows there is still work to be done before the TPP is ratified, with each of the 12 member countries gaining political acceptance of the deal back home.

"No doubt there are political ramifications, particularly on the hill (Capitol Hill the base of the US Congress)," he concedes. "But there is too much at stake to let it fall over and I think it can and will be done."

Petersen says critics of the deal in NZ need to face up to reality and understand the TPP would have still have been done if NZ had walked away – leaving our economy locked out of a free trade deal with the 11 member countries of the TPP and with no preferential access to these markets.

Petersen believes it would have been untenable and economically stupid for NZ to walk away from the TPP.

"Are the [TPP opponents] seriously going to tell all the sectors that will make huge gains from the TPP – even the dairy sector – that it is better to be paying tariffs and losing market share to 40% of the world's market? That would be nuts."