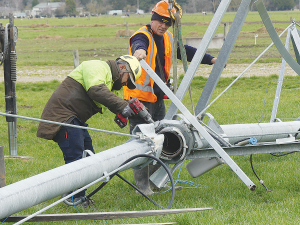 A Rainer Irrigation crew led by foreman Wame Ramalasou, left, works on an upturned pivot near Staveley in Mid-Canterbury. Their first task was to lift a section off a track to give the farmer full use of the farm again, before lifting it all back onto its wheels and assessing the full extent of the damage. Photo Credit: Nigel Malthus.

Two fierce storms moved up the country, passing through Canterbury overnight on September 9 and 10, with the second less than three days later on the Sunday.

While MetService issued a Red Alert warning for the second, Clark told Rural News the first should also have been a Red Alert.

"In some respects, Thursday night/Friday morning was worse than Sunday, depending on which locality you're in. They certainly missed forecasting the Thursday night wind."

Clark says the biggest trouble for affected farmers is the lack of parts and the "pitifully slow shipping service" to New Zealand to repair the damaged irrigators.

"So, people that have got damaged irrigators may not see them going again for Christmas."

Even some irrigators that were tied down and aligned with the expected wind were blown over, Clark says.

"There's quite a few irrigators blown over in the Lyndhurst/Lauriston area, some north of the Rakaia River as well.

"Then on Sunday afternoon there's been a lot of damage around Mount Hutt and above Methven and along the Mid-Canterbury foothills."

However, irrigation equipment suppliers are hoping that a bit of number-eight wire attitude will get the machines up and running.

Rainer Irrigation chief executive Lucas Cawte said the two storms were the biggest to hit Canterbury since a very big event in 2013.

He says from talking with his connections, there could be more than 200 irrigators affected. Both pivots or rotorainers and ranging from some with only minor damage to complete write-offs.

"I can't speak for other irrigation companies," Cawte told Rural News. "But I know that we'll have our guys up and going well before Christmas. We've had a decent amount of stock on hand."

Carrfields Irrigation general manager Brent Dawson said that even in normal times, shipping from America took at least four weeks - but that was rolling out to three and four months.

"Global supply chains are certainly making quite a big impact in terms of supply of products and we've got a lot of stuff on the water that's got to get moved around, just like everybody."

He says it was a matter of working with affected customers to see what could be done.

"There's opportunities to do something as a temporary fix until parts arrive," Dawson says.

The storms hit an area already badly affected by a Red Alert event earlier this year, the big rainstorm and flooding of late May. Scars of the flooding are still evident in roads, now added to by debris from the winds, in the form of fallen tree branches and baleage plastic wrapped around fences.

Clark says a number of hay sheds have been blown away. They were mostly empty at this time of year so it would have no major impact of feed supply but they would need to be replaced for next season.

Meanwhile, Cate Hogan-Wright, who farms a little further south at Montalto, near the Rangitata Gorge, said the wind was "awful" but their farm did not sustain much damage. Tree branches at a neighbour's came down over powerlines on Thursday, but the power was fixed by Friday evening.

"Sunday's wind wasn't as bad, but the lightning and thunder were pretty spectacular," she said.

Clark adds that "by and large" electricity supply stood up very well.

"EA Networks [the Ashburton District's power and fibre network operator] need to be congratulated for the resilience of the network," he says. "There's been a lot of investment made over the last 20 years in strengthening the network and it certainly has stood up well at the weekend. So, well done."