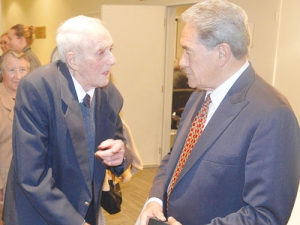 New Zealand First leader Winston Peters got more than he bargained for at a recent Waikato Federated Farmers annual meeting.

After delivering a trademark speech, criticising everyone from immigrants to the National Party, Peters faced questions from Waikato Feds members.

One farmer asked whether a vote for NZ First was a vote for the left, pointing out that getting RMA reforms would be difficult with Greens.

Peters claimed his party has kept the Greens out of governments in recent years.

"Why would you ask me a question like that? Now be fair."

He reminded farmers of his party's deal with Labour after the 2005 election.

"We said to the Labour Party, 'you have a mix over here which looks like an absolute circus. Or you have us over here'."

But the farmer continued to corner Peters, saying he would be better off voting for the right.

Peters replied that he would be worse off either way.

"On one side they don't understand the limitation of taxpayers' pockets," he said. "And on the other side the National Party doesn't understand that growing the wealth of this country is the paramount interest of Government."

In his speech, Peters blasted National's handling of the RMA. Resource management and planning, just like our judicial system, should be colour-blind, he says.

"That has always been NZ First's policy. And National went into the 2005 and 2008 elections belatedly claiming to be the same. The truth is different."

Back in 1989, NZers were told the RMA would reduce government expenditure, curb the increasing cost of housing in Auckland and Christchurch and reflect market-driven economics.

"That was the promise, but things haven't worked out too well, have they?"

Peters is keen on shutting the door to immigrants of all kinds -- human and otherwise.

He also proposes a new approach to biosecurity.

He cited recent biosecurity scares including discovery of velvetleaf, fruit fly, tau fly and a snake in a Nissan Leaf car.

Peters wants to stop the importation of high risk items from high risk countries; Government Industry Agreements must be with an importer because that is where 100% of the risk lies.

When something gets past the border it must be independently investigated, he says.

The government must come to the party on velvetleaf and pay compensation to farmers equal to the cost of annual control, he says.

"MPI should also face the courts here because it is not above the law and its processes have let farmers down badly."