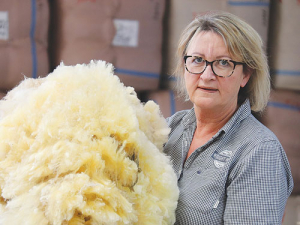 Wright hopes the situation will improve and says she’s not going to leave the industry just because of its present state. She says her staff are young, positive and enthusiastic and she owes it to them to stay and see it through.

Wright says one of the worst things she’s had to do over recent months is to ring up farmers and tell them what their wool is selling for.

“In some cases, greasy wool has been selling for a dollar a kilogram. Neither myself nor my father can remember wool fetching such a low price,” she told Rural News.

Wright says the central Hawkes Bay, where her business is based, has been hit by the double whammy of Covid-19 and the drought. She says a lot of capital stock have been killed as a result of the drought – so the number of sheep to be shorn will be lower than normal.

“The other thing in Hawkes Bay is that it is a big second shear area through May, June and July and is one of the busiest times of the year,” Wright adds. “But a lot of people simply aren’t going to be able to second shear because of the lack of feed for their stock so we are going to miss out on that.”

Wright says Covid meant that during lockdown it was not possible to sell wool, but during that time the industry – including shearers, classers, scourers and exporters – spent time communicating with each other and finding out what all the different groups were doing and how they could best work together.

She says while sales were restricted during lockdown, so too was processing wool and it’s taken time for the product to move. “India has only just opened up, Europe is still closed and while China is open it’s taking 90% of the wool from Australia and a large amount from South Africa and the UK,” Wright explains.

“China is also taking some of our wool, but when they have finished producing the yarn, carpet, jerseys or coats it begs the question where do these products go,” she adds.

“Sixty percent of the products that China produces from our wool goes to the USA and at the moment, that market is closed.”