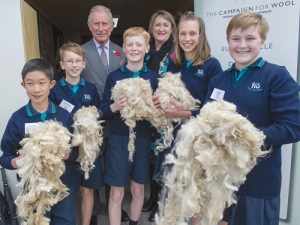 A unique mobile 'woolshed' has had a royal send-off on a nationwide journey.

Prince Charles, a UK wool producer in his own right, during his recent visit here, officially launched the 'woolshed project', aimed at inspiring children aged 11 and 12 about the quality and versatility of wool.

The event, at an intermediate school at Tawa, had a group of students trying out the shed while Prince Charles looked on.

The travelling woolshed is part of an education effort by the Campaign for Wool NZ Trust, headed by Waipukurau wool broker Philippa Wright and funded by PGG Wrightson.

The woolshed is a shipping container brilliantly kitted out with static and interactive displays. Designer Gaylene Hosking says it's intended to provide a "journey" for children "to explore as they want," Hosking told Rural News.

"It relies on their curiosity, which is why things are in drawers and behind cupboards, so they can open them and discover whether it's greasy or carded wool
or a product made from wool," Hosking told Rural News.

"There is a blend of the practical and technology. We wanted them to have a practical experience with wool and engage it in a tactile way, and we also have DVDs in the shed and a link to a website as an 'in class' resource."

Kids can experience wool and feel excited about it and teachers can do a curriculum activity using the website, Hosking says.

"This might involve looking at the science behind whether wool burns or not and comparing it with how other fibres burn. They can look at how wool is used in sporting items, for example all the tennis balls used at Wimbledon are made from wool and the core of a softball contains wool."

On the day before Prince Charles arrived, Rural News had a preview of the children seeing the woolshed for the first time. They were clearly excited and enthused – opening drawers, playing DVDs and handling wool in all its forms. They were doing a project making an All Blacks supporters' jersey from wool.

Philippa Wright showed Prince Charles around the shed and says he was delighted at the project and impressed to see the huge number of products on display made from NZ wool.

"He was fascinated to learn that the inside of a softball has wool in it, a 4kg fleece yields enough wool to cover 563 tennis balls and all the Wimbledon tennis balls are covered with NZ wool."

Wright says they chose to target children aged 11 and 12 because that age group can absorb and retain information and are open to new thinking.

Schools wishing to have the woolshed at their place can book it on the website www.campaignforwool.co.nz 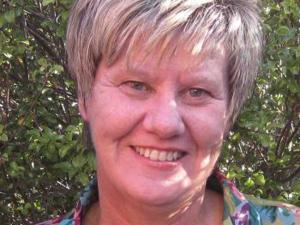