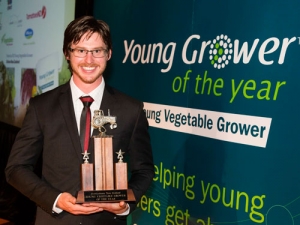 The day-long competition, which is supported by Horticulture New Zealand, took place in in Pukekohe on 16 April. On the day, the four competitors battled it out in a series of practical and theoretical challenges designed to test the skills needed to run a successful vegetable growing business.

“Winning the competition was really unexpected and this year’s had some of the best young growers I’ve met,” says Gates, a 24-year-old washline supervisor at AS Wilcox & Sons.

Gates has won a travel grant for professional development valued at $2,500. The prize also includes a one-day media and presentation course in Wellington, all-expenses paid trip to Christchurch to compete for the national 2015 Young Grower of the Year title in August and attendance at the 2015 Horticulture New Zealand Conference.

“I’m looking forward to competing in the national Young Grower title and will be stepping up my preparation over the next few months,” he says.

Kiran Hari, co-ordinator of the competition, says, “It’s great to see how much talent our young growers have. We know that our industry demands a lot, and we’re looking forward to seeing our young talent continue to progress and grow their careers over the coming years.”

Michael Anderson (29) from Canterbury was placed second and third place went to Lance Pratt (29) from Pukekohe.