A quarter century on and they're still on track(s) 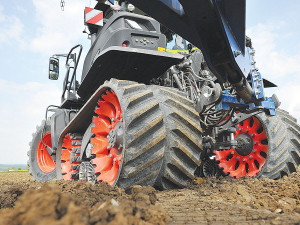 The year 2022 marks 35 years of manufacturer Claas fitting rubber tracks and 25 years of utilising its own design.

Initially, the units were supplied by Caterpillar and fitted to the last of the Dominator harvesters, although at four metres wide, the tracks weren’t particularly popular in Europe.

Fast forward to 2022 and these have become increasingly popular. In the first year, only around 10% of combines were optioned with tracks; this now stands at 50% overall and up to 90% in the UK market.

Wanting to improve on the Cat design, with dimensions to suit the European market, in 1997 Claas introduced its own friction drive units, which have been progressively refined ever since.

Terra Trac now incorporates its own integral suspension and can reduce its effective length by lifting the front idler wheel when turning on headlands. This latter feature may increase the ground pressure exerted, but it does reduce the scuffing of the soil that creates a “berm” as the machine turns.

Said to be ideal for spreading, mowing or hauling chaser bins, as well as performing heavy draught work – such as cultivation and seeding – the tracks can also be fitted at a three-metre spacing for use in controlled traffic farming systems.
AXION 960 TERRA TRAC (445 hp) and AXION 930 TERRA TRAC (355 hp) are fitted with fifth-generation crawler units on the rear axle. This improves traction and reduces soil compaction, while having front wheels makes it easy to steer like a conventional tractor. Each friction drive unit comprises an oversized drive wheel, two roller wheels, an idler wheel and an automatic tensioning cylinder.

The drive and idler wheels are designed to be self-cleaning and reduce the build-up of heat. The two rollers are independently suspended and have up to 120mm of travel, while each assembly can pivot up to 23 degrees longitudinally.

Featuring front axle and four-point cab suspension, the operator can also choose three steering modes and adjust the tractor’s ground clearance by up to 12cm using the CEBIS terminal, to match the height of the tractor to the implement.

CLAAS Industrietechnik in Paderborn, Germany, has built more than 35,000 TERRA TRAC units since 1997.

The tie-up gives Claas and Amazone access to autonomous technologies, while AgXeed will benefit from the expertise of both companies in product development, sales, service and international distribution.

Each platform is powered by a 74 or 156hp or diesel-electric motor, weighing in at around 6 tonnes, allowing it to be fitted with a suite of implements for use in broadacre, pasture and speciality crops.

The first models for commercial release are expected in early 2023, via selected Claas dealerships in Germany and Switzerland.