A sedan for all occasions 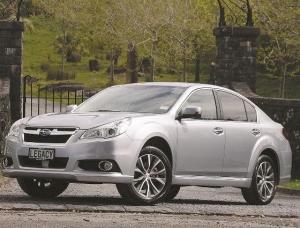 THE SUBARU Legacy X could be seen as the answer to a question nobody was asking: a high-riding all-wheel-drive (AWD) sedan.

However, Subaru NZ is convinced there is a buyer who needs AWD and ground clearance, but, perhaps for prestige reasons, wants to be seen in a sedan rather than a wagon.

Cue the Legacy X, essentially a sedan version of the Outback 3.6; as such it is basically a very good car, with the Outback's mix of handling, ride and performance.

Featuring a 5-speed automatic transmission with manual mode, Subaru Intelligent Drive (SI-DRIVE) and push-start ignition with smart key, its performance is underpinned by a 3.6L DOHC Boxer engine that produces 191kW of power.
It is a thirstier engine than the 2.5L four-cylinder boxer, and doesn't come with the fuel-saving CVT gearbox either, but relative to the other big-six sedans prospective buyers of the X might currently be driving, it is acceptable.

On country roads and farm races, the extra ground clearance of 200mm keeps the underbelly clear of most rocks and ridges, although there's a limit – it is not a true off-roader.

Its on-road performance is true to the brand though, and despite the compromise of all purpose tyres, the car grips well and is fun to drive.

It also has Subaru's new "driver assist system" called EyeSight, which uses three-dimensional images captured by two cameras mounted at the top of the front windscreen that act as a second pair of eyes that monitors the road ahead and recognises potentially dangerous driving situations.

The first time you let the car brake by itself to avoid clonking the car in front, you'll have your foot hovering over the brake pedal, just in case, but you quickly learn to trust the system.

It works well and if every car had a similar system there'd be no more nose-to-tail accidents. The only caveat is that because the system uses cameras not sonar, poor visibility could potentially reduce its effectiveness.

Cost is $67,990. Not cheap, but it's a good car and comes loaded with technology. Time will tell how many buyers were looking for such a car, but just didn't know it yet. – Adam Fricker

Outback front in the wagon wars

It's not hard to believe that the Subaru Outback accounts for about 45% of all the Subarus sold in New Zealand each year.