A wrap for Kuhn 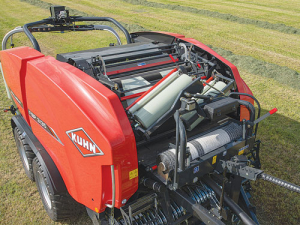 Awarded the prize Machine of The Year 2018 in the forage harvesting category at the recent Agritechnica event, the Kuhn FBP 3135 baler wrapper combination achieves high silage quality at low costs.

To achieve this, it uses Kuhn's unique film binding system — an alternative to conventional net wrap.

Using two 750mm film rolls rather than a single set-up, the system is said to save up to 30% in film costs, with the bonus of offering lighter rolls (27kg) for the operator to handle rather than the more typical 40kg+.

Inventory management is also said to be easier with only one type of film having to be bought for both binding and wrapping.

In operation, at the start of the wrapping cycle the two applicator heads start in a vertical position to create two strings of film which are applied on top of the bale. After tilting to a horizontal position, the wrap covers the full width of the bale after just half a rotation – much quicker than a conventional wide-mantle film.

From the bale chamber, a transfer system with smooth rollers moves the bale to the wrapping sector, forming a well-sealed bale using both 3-D wrapping and Intelliwrap features. Again, using regular stretch film, the additional wrapping is said to become an ‘extension’ of the original bale chamber application, creating a perfect seal.

The film applied to the cylindrical side helps bales retain their original shape and allows prolonged storage if necessary. Meanwhile, the Intelliwrap system allows control of the number of film layers applied to suit local crop or climate conditions.

Also designed to increase output by avoiding downtime, the Kuhn FBP 3135 has an intake unit that uses the maker’s fully automatic rotor Deblock function to allow clearance of rotor blockages from the tractor seat, automated knife cleaning at a pre-determined interval and the ability to change from film to conventional net binding.

Operator comfort and maximum control are guaranteed using the new Process View user interface on the ISOBUS controller. This user interface conveniently shows the different procedures within the machine, allowing each process to be paused and restarted at any time.