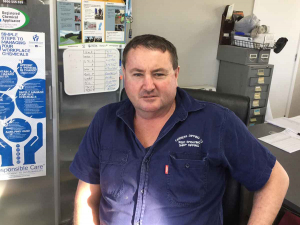 RCNZ president David Kean says there is mounting concern among contractors that without skilled operators much of their machinery will sit idle, causing havoc for farmers and contractors alike.

Agricultural contractors are becoming increasingly frustrated at the lack of skilled workers available.

The frustration comes amid growing concerns for the industry and farm production in the face of a critical shortage of skilled machinery operators.

Industry body Rural Contractors NZ (RCNZ) is calling on the Government to allow overseas-based operators back into New Zealand to help alleviate the growing problem.

Kean says there is mounting concern among contractors that without skilled operators much of their machinery will sit idle, causing havoc for farmers and contractors alike.

Kean fronted a stormy meeting of RCNZ members in Gore after the meeting with O’Connor late last month.

“We had 60 people, contractors and their wives and partners. They’re stressed because they’ve financed millions of dollars of machinery. These are in the yard ready to go but in many cases, there are not enough Kiwis with the skills to drive them.’’

Kean says while RCNZ supports the Government’s wish to train more New Zealanders, the reality is the industry relies on experienced overseas workers to get the work done.

“We’ve said to the minister, we will do all we can to employ Kiwis and also accept that anyone coming in to meet the shortfall will be in quarantine for two weeks, at our expense,” he says.

“The critical thing now is getting numbers confirmed and arrangements underway in time to meet the farming community’s requirements once spring arrives.”

Kean says RCNZ has worked with the Southern Institute of Technology to do initial expos and 40 people are now going through the first of six courses at the SIT Telford campus. He says they are also working on North Island courses.

“However, while such six-week courses may provide people with sufficient skills to drive a tractor safely, a big piece of equipment such as a combine harvester or silage machine needs much more in the way of training and skills development.”

O’Connor says he acknowledges the issue facing rural contractors and others in the ag sector and is working on a solution.

“I’m acutely aware of the issue and of the concerns of Rural Contractors NZ – and others in the primary sector,” he told Rural News.

“I am working closely with the Immigration Minister on issues relating to overseas workers across the primary sector.”

Kean told the Gore meeting that rural contractors are suffering from the same impacts as many other businesses hit by COVID-19.

“If we can’t get some of these workers in, there will be major impacts for farming output as well as for contractors,” he warns.

RCNZ chief executive Roger Parton says ag contractors have been taking on New Zealanders displaced from other work in recent weeks. However, he is concerned that if their former jobs open up again in tourism or aviation, they will go back to these roles.

“RCNZ understands it needs to work with the Government to fill all the gaps it can before it looks to bringing in people under the Essential Workers category,” Parton explains.