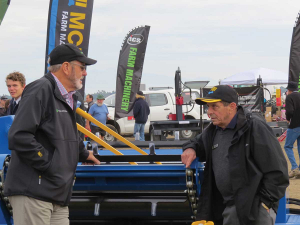 The founding director of a top local farm machinery manufacturer has died, leaving behind a legacy based on strength and reliability – personal traits that live on in his company and the products it builds.

Bill McIntosh and his brother Bryant founded McIntosh Brothers in 1951, starting as jobbing engineers around Palmerston North. In the ensuing years, the company grew into a leading manufacturer and exporter of farm machinery and the Manawatu’s largest crane hire company.

The well-known McIntosh Farm Machinery range of farm gear, in blue livery, is among the strongest in the market and is now exported to various offshore markets. The McIntosh brothers got started in the farm machinery market by making sheep showers and stock crates for trucks. The stock crates necessitated a crane, so the brothers built their own on a Commer TS3 truck, then a second and a third –the beginnings of the crane part of the McIntosh cranes business.

In 1973, they displayed the first forage wagon at the national field days, generating great interest among farmers. Those were early days in the development of feeder wagons in New Zealand, but they are now a core product line for McIntosh Farm Machinery and a common sight on NZ farms.

Before Bill passed away early this year, he was the oldest of three generations of the McIntosh clan working in the business, which has grown substantially since 1951.

Possessing an incredible work ethic, Bill didn’t retire until health issues forced him to in his late eighties. He was 90 years old when he died – a milestone he had set himself, according to family members, saying “I’ll get to 90, then I’ll reassess.”