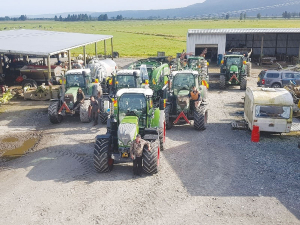 Von Ah Contracting's trio of German-built 720 and 724 Fendts are reliable and productive tractors and play a key component in the business's ongoing success.

It all started when Marty von Ah’s father emigrated from Switzerland to New Zealand in 1976 and started sharemilking at Waitara, Taranaki. After Marty was born in Taranaki, the family moved to the South Island’s West Coast region in the early ‘80s to milk cows.

Unfortunately, they were hit by the tragedy when Marty’s father was killed in an accident, meaning he and brother Werner took over the running of the farm. Over the ensuing years, von Ah did some local contracting work before setting up the business in 2009.

In 2020, he moved away from the farming side of the business to concentrate on contracting operation with his wife, Nicky. They have built up an extensive operation that specialises in feed production, mainly for the dairy farmers in the region. The business leases around 500ha, while also owning 30ha adjoining their operating base in Kokatahi, near Hokitika.

Operating over a 30km radius from their base, the businesses focuses on feed production – including cut and carry operations, grass and maize silages and baleage for the region’s herds. It also overwinters dairy cows and followers.

As one would expect of such an extensive operation, reliable and productive prime movers are a key requirement. In the case of Von Ah Contracting, this is a trio of German-built 720 and 724 Fendts. Marty von Ah praises the functionality of the brand, particularly in the area of the transmission and engine. The former offers stepless control, allowing the operator to match the speed precisely to the job and “tweak” that speed as conditions change.

“The Fendts are really user friendly, easy to drive and make most jobs very easy to complete,” he says. “If you dig deeper into the operating system, the technology includes things like the ability to have operating profiles set up for each of the implements we use.”

With the three tractors each clocking up between 1,200 and 1,400 hours every season, fuel efficiency is also a major consideration.

The tractors’ ability to operate at set speeds with minimal engine revs sees the Deutz-engine machines take a wide berth of the local fuel pumps.

Von Ah also likes the fact that if there are any problems with electronics, most functions can still be operated manually. He says this means a job can be finished, the tractor then taken home and a repair organised.

On the safety side, all the tractors are fitted with air braking systems. This is a must for the slurry tanker, trailers and loader wagons – all used extensively throughout the year.

Additionally, the tractors ISOBUS systems mean that machine functions are immediately visible in the Varioterminal. This means adjustments can be easily made, while also removing the need for multiple control boxes in the cabin.

When it comes to servicing, the majority of this is carried out inhouse. The only need to call the supplying dealer is to clear or interpret error codes.

What about the future? Probably more Fendts joining the fleet, but in the short-term more efficiency and accuracy and a job well done.

“Despite rising costs for most inputs, dairy farmers are looking like they are in a good space,” von Ah says. “So, they are happy to pay for a job well done with modern equipment.”