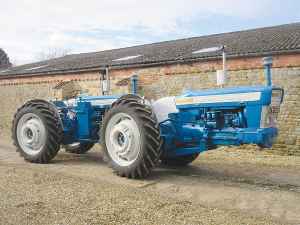 The success of a recent UK auction of 1960s tractors should be a prompt to see what’s lurking in the gloom of your old machinery shed.

The tandem tractor (serial number D663) was based on bringing together two well-known Ford 5000 tractors. The auctioned machine was reckoned among the last of the 130s to be made.

Its provenance was even more interesting. It was sold new to George Pryor, of Navestock, Essex. He was the farmer and inventor whose original concept led to the famous Doe Triple-D tractor.

Production of the 130 ended in 1968 by which time 170 units had been built. Then demand dropped away as mainstream tractor manufacturers began selling their own higher horsepower machines.

The original tractors emerged from George Pryor’s experiments in 1957 to bring together two Fordson Major tractors around a central pivot point. His large acreages of heavy Essex clay soils spurred him into developing a powerful 4WD tractor.

The tractor performed beyond expectations and Pryor, then a customer of local dealer Ernest Doe and Son, received a visit from Ernest Charles Doe. They agreed to put the tractor into production.

The first production machines were based on Fordson Power Major ‘skids’ and launched in 1958 as the Doe Dual Power. In 1959 the tractors were re-badged as Doe Dual Drive, leading to the now familiar Triple-D for short.

George Pryor kept the original tractor, which was extensively modified, for 10 years. Then he and his brother each bought a Triple-D in 1961, followed by the auctioned Doe 130 in 1968.

Compact Koreans cut to the chase

Korean tractor brand TYM Tractors have been available in New Zealand for more than a decade, building a reputation for quality as a quiet achiever.

Compact Koreans cut to the chase

Korean tractor brand TYM Tractors have been available in New Zealand for more than a decade, building a reputation for quality as a quiet achiever.

Massey Ferguson has announced updates on the Tier2 version of the MF 8700S, which is now available on indent orders.

With Stage V emissions regulations coming into force across Europe, Valtra has taken the opportunity to include some new features on its updated models.

A new generation of McCormick tractors, aimed at livestock operators, is now available in New Zealand.