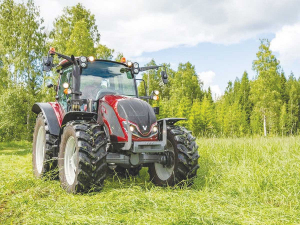 The new Valtra A series tractors see a range of new transmission options that will appeal to those looking for a compact workhorse.

Making way for the fifth generation of A series, the outgoing A4 tractors were always popular for livestock operations, resulting in more than half the production supplied with factory-fitted front-end loaders.

This fact has not been missed by the new A5’s designers who have focused on introducing powershift transmission options and an upgraded armrest control system usually seen on the company’s larger hp ranges.

At the heart of the tractor, the A5 series retains the three-cylinder, 3.3 litre AgcoPower engine in the three smallest models, while the four larger tractors in the seven-model range get the 4.4 litre, 4-cylinder engine from the same camp.

Horsepower output remains the same for the 3-cylinders, but the 4.4 litre units each gain 5hp over the outgoing A4 series. Both engine formats meet the latest Stage 5 emission regulations using a combination of DPF and SCR technology, with service intervals pushed out to 600 hours.

Like its predecessor, the A5 is offered in three different wheelbases, with three smallest measuring in at 2250mm, the middle pair is stretched to 2430mm and the two largest models are fitted with a 2500mm chassis.

A basic 12F/12R speed GL transmission is the base unit choice for all models, while a two-step powershift HiTech 2 set up, offering 24F/24R speeds is now available on all the three-cylinder models. Elsewhere the mid-range A105 and A115 get the choice of three gearbox options, with the base 12F/12R GL, a 16F/16R HiTech 4, powershift and a 32F/32R speed creeper set up that can get down to 100m/hour. The HiTech 4 unit is controlled electronically, while all models incorporate a F/R shuttle with an integrated handbrake.

Other notable features include the selectable AutoTraction control system, redesigned engine hood and wheels and the main power isolation switch incorporated into the ignition switch. Options include rear fender PTO control on the HiTech 4 models and the Valtra Connect remote monitoring system.