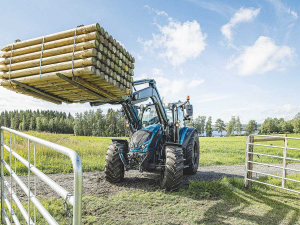 The G125 offers the ECO-Power system, while all models offer 5hp power-boost, except for the G135 which has an extra 10hp and maximum torque of 560Nm.

While assembled at Valtra’s Finnish Suolahti plant, the four-cylinder, 4.4-litre, Stage V AgcoPower engine is sourced from the company’s Changzhou plant in China. It is then mated with a semi-powershift transmission from the GIMA collaboration in France.

The tractors offer 24 forward and reverse speeds, which are delivered from four ranges and six powershift steps. The configuration is offered in HiTech, Active and Versu guises.

HiTech is an open-centre hydraulic 100 l/min open-centre system, offered with three mechanical valves and a mid-spec armrest. Active offers the same general spec, but upgrades to a closed-centre, load sensing pump of 110 l/min output. The top of the range Versu configuration uses the same 110 l/min pump, but is combined with four electronic remotes and the SmartTouch terminal.

All models offer lift capacities of 6 tonnes at the rear and 2.9 tonnes up front.

The tractors’ suitability for loader operations appears to be confirmed by its dimensions.

Weighing in at 5140 kg and presenting a maximum permissible operating weight of 9500kg, the new G fits between the A and N series. The cabin comes from the A series and is fitted with a one-piece windscreen, 5.7 square metres of glass and a noise level of 73 dBA.

For those wanting a more individual look to their tractors, the Valtra Unlimited Studio offers a more customised appearance – including colour, leather upholstery, trim and audio upgrades – a choice the company reports is taken up by 27% of purchasers.

Currently being shipped in Europe, the new G Series tractors are scheduled for release in Australia and NZ during 2021.

Valtra's fifth generation model range has been completed with the addition of an allnew Q Series, which fits between the popular T and S Series and offers 230 to 305hp.

A cut above the rest