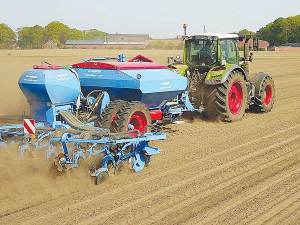 Lemken claims there are yield and quality advantages by precision planting maize in two staggered rows.

German manufacturer Lemken claims there are yield and quality advantages to be gained by precision planting maize in two staggered rows.

Following research carried out at the University of Osnabrück in Germany, the results showed a beneficial effect on maize silage quality, with a 7.9% increase in metabolisable energy and 5.4% increase in biogas production.

The research used a large-scale trial plot. Yield and quality was measured for three different sowing rates of seven, eight and nine seeds/m² (70,000, 80,000 and 90,000 seeds/ha) using the staggered twin-row DeltaRow technique on the Lemken Azurit 9 precision drill. Compared to single-row systems, improvements were recorded in each scenario, with the greatest improvement at the rate of eight seeds/m², where yields increased by 4.5%.

Researchers suggested that this technique offers plants roughly 70% more room to grow with improved access to moisture and nutrients.

Probably better known in the viticulture sector, Tractor Repairs and Spares (TRS) is now expanding into the horticulture area - with a focus on apple - after purchasing the FMR business in late 2020.