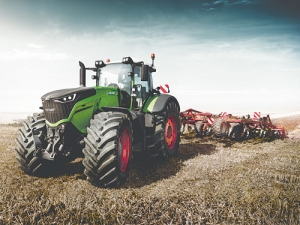 Fendt believes its 400-500hp models will supply demand that until now has been dominated by gigantic track layers.

Fendt has long pushed the boundaries of new tractor technology.

It pioneered headland management, on-board tyre inflation and exhaust brakes while other mainstream brands played catch-up. So it's no surprise to hear Fendt will unveil its new 1000 series soon at Agritechnica.

The company says this 400-500hp wheeled tractor will supply a demand that until now has been the domain of gigantic tracklayers, dogged by inherent problems of weight and size.

While this world market is relatively small -- 2500 units per year -- Fendt believes the 1000 series' ability to do heavy cultivation or road work will find favour with certain users.

Cooling is by a hydraulically driven 'push' fan forcing air across the engine, the warm air exiting at the sides. Emissions control is by SCR/Ad-Blue, and the low revving design of the lump makes extra DPF or DOC elements unnecessary.

Clever engineering forestalls front wheel drag, as the wheels are pushed along, and at any speed over 25km/h the drive to the front axle disconnects, only the rear axle driving. From the hydrostatic pump oil is free to take the path of least resistance to each motor, allowing variable torque distribution between each axle and eliminating wind-up suffered with mechanical drive lines; the result is lower power loss and tyre wear and a better turning radius.

A newly launched control called Grip Assist helps the operator identify the need for ballasting, it's position and on-the-go tyre pressure adjustment. This should make the transition from heavy cultivation to road work and back again a real breeze. Tyres up to 900-70R46 can be accommodated and up to 1250kg ballast can be added to each rear wheel.

The cabin is as seen on the 800 and 900 series, with four point air suspension, and it combines double wishbone front suspension for a smooth ride. Automotive style lighting includes headlight levelling, hi-viz high level brake lights and daylight running lights.

Production is scheduled for first quarter 2016, and prices are yet to be announced.

Deutz Fahr has introduced the new 8280 TTV, which is aimed at filling the gap between its current 7 and 9 Series models.

The green machine updates its range

John Deere has announced updates and additions to its lineup of 7R and 8R tractors for the 2021 model year.