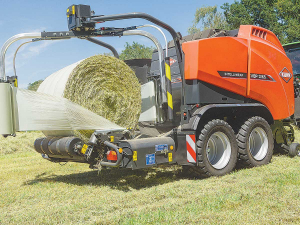 The manufacturer claims this increases the baler’s versatility in silage production. The process has already been a proven concept on Kuhn fixed chamber baler-wrappers since its introduction in 2015.

Using regular, freely available wrapping film enables customers to benefit from a lower purchase price and use a much higher pre-stretch ratio compared to conventional wide film binding systems. This is said to reduce film binding costs by up to 37% and extends the intervals for changing film reels by around 30%.

Thanks to lower roll weights, the film is easy to handle. Combined with the low lifting height and the user-friendly film roll holding system, this makes the exchange of film rolls on the VBP 3100 series an easy job.

The film and net binding systems are two separate systems, which enables the operator to switch between the two without the need for tools.

The additional oxygen barrier guarantees better silage quality, and the improved bale shape enables more efficient storage. There are also many practical benefits for the farmer.

A film bound bale means easy unwrapping, even during frost periods. There is no collection of silage in between the wrap so no feed is lost.

Film-wrapped bales make waste management more efficient; there is no net and film to be separated, so all the plastic film can be recycled together.