Forage harvester in a league of its own 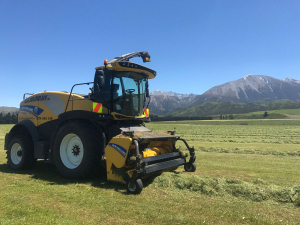 Canterbury-based rural contractor Steve Murray reckons his newest New Holland, self-propelled, forage havester – a FR650 – is in a league of its own.

Rural contractor Steve Murray has run New Holland self-propelled forage harvesters for 20 years. He reckons his newest machine, an FR650, is in a league of its own.

“We’ve used New Holland FR harvesters, and FX series before them, going back to 1998,” he says. “We like New Holland for their reliability, strength and manufacturing quality so we’ve stayed with them.”

“Besides being much stronger the FR650 is more fuel-efficient,” he says. “Despite it being more powerful (653hp) it’s burning less fuel.”

Fitted with the new 6-cyl Cursor 16 engine, specifically for forage harvesting, the unit has an “almost instantaneous” transient response.

“They say you can get a 20% fuel saving with it and we would have done that at least over again, burning just under half what we used to burn,” Murray says.

“Even when running in Eco mode, the engine will still deliver its full horsepower. Although when harvesting grass silage it isn’t working as hard as it would in maize; we used it on maize last year and the increase in productivity was outstanding.”

The FR650 has many technology improvements, particularly in the feed rollers and cutterhead areas. The cutterhead is available in three configurations to match chopping requirements, with 2 x 8, 2 x 10 and 2 x 12 knives for a length of cut range of 6-33mm, 5-27mm and 4-22mm, respectively.

The Hydroloc feed roll drive system enables the operator to adjust the length of cut to match crop conditions on the go.

The autoload function sees to filling trailers or trucks to 75% of capacity before the operator needs to take over manually. Other useful features include yield mapping with GPS data, crop moisture readings and an efficient metal detection system.

Murray says fuel saving is one of the FR650’s major benefits.

“We can’t charge more [for fuel] for the work we are doing, because the farmers aren’t getting paid any more,” he says.

“We have to find efficiencies in our operation, so we give the harvester a bigger feed to make fewer runs in the paddock with reduced fuel usage.”