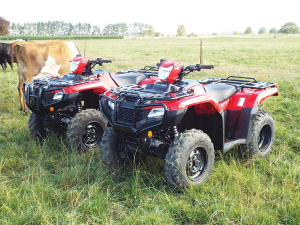 The Christmas and New Year break meant a chance to recharge the batteries, but also to get to grips with the latest TRX 520 ATVs – a brace of which were dropped off by the very nice people from importer Blue Wing Honda.

While both models featured an increased capacity powerplant, we were able to try both a manual 5-speeder and the 5-speed automatic – with the latter also offering high and low ranges.

For the 2020 season, the fuel-injected engine gets an extra 43cc to bring it to 518cc. This is said to offer more low and mid-range power and torque – a trait that is very noticeable on both machines- with immediate pick up as the throttle is applied; with speed rising very quickly.

For the auto version, a new reverse actuation switch – used in conjunction with the forward/reverse buttons – make directional changes very easy and also finding neutral. From a user perspective, the layout also allows the machine to be stopped in gear, which then returns automatically to neutral for restarts.

Interestingly, a new shift map in the electronic gearshift system works in real-time, making for very smooth upshifts – although downshifts could be a little unpredictable.

Other new features include a new front grille and carry rack; the latter designed to accommodate a new range of accessories and a new 1.9 litre storage box at the front of the machines. A right-side handlebar switch, on both models, allows “on the fly” selection of 2WD, 4WD or 4WD with a locked front differential.

Although the holidays meant a quiet period on the farm, both vehicles were used daily by up to three different staff, for a range of tasks from transport, to pulling a trailer carrying a few bales or tools for fencing repairs or water leak detection. Feedback from the staff saw the older members preferring the Auto/Independent suspension machine for ease of use and comfort; the youngest member of the team, a 2-wheeler die-hard, preferred the manual shifter. When quizzed about his choice, he suggested the auto box would maybe cost a lot to repair if it had any problems.

Everyone agreed there was plenty of power, with the Auto machine benefitting from the option of high or low ranges for towing.

Going back to the comments about rider comfort, power steering got the big tick from all the riders, featuring assistance that became less as speed increased, so great at slower speeds. The same wide comfortable seat and solid footwells are fitted to both machines, the engine and exhaust are isolated with rubber mounts, but the back ends are significantly different.

Although both bikes feature double-wishbone front ends, the manual machine is fitted with a fully enclosed, solid rear axle – mounted via a swinging arm suspension layout. The tow hitch is mounted directly to the rear axle to give a smoother ride, but sees towing capacity drop to 385kg.

By contrast, the more up-market auto transmission machine has a fully independent suspension layout, that the testers decided gave a superior ride, alongside a towing capacity of 600kg.

In both situations, wheel bearings, pivot bushings and ball joints were all fully serviceable.

In summary, both ATVs are put together in a way that you would expect from Honda, particularly in the way things fit and work and the general quality of the fastenings.

Making the only choice then, if are you a purist who likes manual shifting and a solid rear axle; or auto changing and fully independent – letting the machine work things out.

Described as Kawasaki’s premium Mule side by side, the PRO-FXR is a sport utility machine that combines a wide-body chassis with a 320mm shorter wheelbase.

A step up for two-wheeler fans

Replacing the well known XR 125, the new Honda XR 150L is a step up for those preferring two wheel transport on the farm or between properties, as the machine is road registerable and LAMS approved.