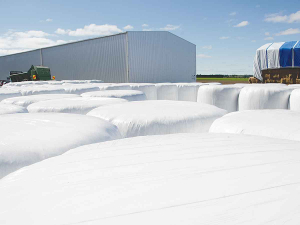 Silotite and Silotite Pro Stretch film has been independently tested.

But they haven’t all been buying the best technology to extrude silage wrap that is longer, stronger and stretch and puncture resistant.

So to verify its film wrap quality, the Berry/bpi group has had its Silotite range of silage wrap tested by an independent certifier.

The P-mark logo confirms that Silotite films have been independently assessed and quality tested, with a focus on raw materials and manufacturing processes. It also shows the manufacturer is subject to ongoing random inspections and product sampling, says Agpac general manager Chris Dawson.

“When extruding polyethylene films it is possible to produce thinner stretch films which can be sold in longer rolls, sometimes resulting in thinner, not better film,” he said.

He says silage contractors should be cautious about the claims manufacturers make about their products and if they’re unsure should rely on an independent guarantee. In the case of P-mark certification this includes tensile strength, stretch, cling, UV resistance, impact resistance and airtightness. Each roll of Silotite film is guaranteed to have the stated length, thickness and width, and to achieve 70% pre-stretch when wrapping bales.

“Contractors who upgrade their wrappers with cogs which can pre-stretch the film to 70% have a real advantage because they can wrap more bales per roll of film,” said Dawson. “But  few films sold today on extra long rolls can withstand this degree of stretch.”

Silotite Pro is available in 1650m and 1950m roll lengths, with patented plastic sleeve packaging that can be recycled with used film -- no need to dispose of cardboard boxes.

Kuhn's new SPV Access and Power self-propelled silage cutter and mixer models have been developed to provide users with a compact, low height, easy to handle machine, with a 126kW (170hp) engine.

A new mower from Irish manufacturer Malone will be of interest as a no-nonsense, heavy duty machine for use in hay or silage production.

Dominant in the New Zealand baler/wrapper combi market, the McHale Fusion Series distributed by Power Farming Wholesale has been popular with contractors and large-scale farmers for many years.

Grass silage begins to break down once exposed to air, making steps to reduce losses crucial.