Less hassle with set-up, but still a straight furrow 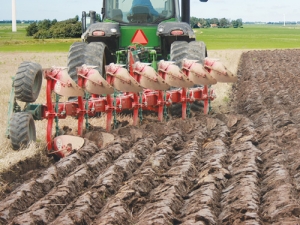 The 2500 series i-Plough will banish the black art of plough set-up to old fellas in pubs.

With the biennial Agritechnica show in Germany just finished, a number of manufacturers launched new products.

Kverneland Group appears to be on a roll with new products and upgrades to existing lines likely to keep them on the wish lists of many farmers and contractors. It's now three years since they were acquired by the Japanese giant Kubota and industry sources say the result is improved manufacturing facilities and processes, better quality and – not least – the acceleration of R&D projects.

One such project is the 2500 series i-Plough, which will banish the black art of plough set-up to old fellas in pubs. Available in four to six furrows, the series will use ISOBUS compatibility to allow complete set-up from the tractor seat. After inputting all the key dimensions of the tractor – such as wheel track, inside tyre measurements and tyre sizes – the system will automatically set the front furrow width.

The system also uses completely automated control of the plough's vari-width system – via GPS – to self-steer and maintain a straight furrow across a paddock. Though this is easy to do during on-land ploughing, if a tractor is equipped with autonomous steering, good in-furrow results have been harder to achieve because the tractor is at the mercy of the last furrow and can't intervene to straighten the work.

From a practical perspective, i-plough is operated through an ISOBUS compatible terminal or Kverneland's own Tellus system. The ISOBUS control allows four different modes – transport, work, park and mark. When switching between modes the plough configures itself automatically for the task in hand, saving time and increasing convenience.

In the transport mode, the hydraulically split headstock allows the plough to be towed like a semi-mounted unit and allows up to 35 degrees of steering angle.

Other new features include a round profile leg assembly that resists trash build-up and a centralised skimmer set-up mechanism that reduces adjustment time by 50%. For plough protection, a choice of shear-bolt or mechanical auto reset is offered, the latter having a teardrop-shaped leaf spring assembly and 800mm under-beam clearance.

At the rear end of the plough, the long established depth wheel can be upgraded to a novel tracked depth control unit of compact size so that it tucks under the plough beam and allows the plough to operate right up to the boundaries of paddocks.
www.powerfarming.co.nz

The range of Kubota MGX front-end loaders has been extended with the arrival of two mechanical self-levelling units.

If you want a sneak peek at Kubota’s vision for the future, look no further than its Concept-X tractor recently unveiled in Kyoto City.

Sidekick maybe cream of the crop

Rural News reported on the launch of Kubota’s RTV X850 recently, and now we’ve spent a week with the new sport/utility on Waikato dairy farms.