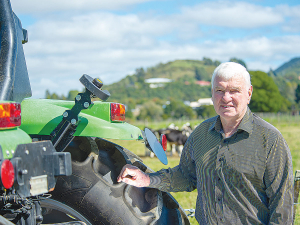 Farmer, engineer and owner of Strainrite, Maurice Wooster, says that his company has been manufacturing its own pigtail standards for decades. He works closely with local farmers to design and produce standards that are free of the faults that farmers say are often found in cheaper, imported pigtail standards.

“At Strainrite, we press-form the foot into a shallow ‘U’ shape, so that the edges curl downwards when it’s trodden in. These edges, or sides, give it superior strength without adding any additional weight,” Wooster explains.

“Each foot is also machine-press crimped on to the shaft, which makes the join much stronger than if it was just welded on. We’re the only ones who do both these things. Some other manufacturers use flat bar or wire section feet, but they aren’t as effective.”

“The foot on some of the opposition standards breaks off when you’re pushing them in. There is a weakness in their manufacture,” he says. “The Strainrite standards have a more robust foot which stands up to a fair bit of abuse.”
The uniquely-shaped Strainrite foot has other advantages.

“It also provides better ground-hold because the ‘U’ shape compresses the earth as it goes in. Just like cleats do on a tractor wheel. That means that our standards don’t fall out, even when they’re bent,” explains Wooster.

The company briefly used moulded plastic feet on some of its pigtail standard range several years ago, but quickly moved away from the practice after negative farmer feedback. This revealed that the plastic often became brittle and snapped in the cold and tended to deflect and break in the heat.

Customer experience drives Strainrite’s product development and the company has incorporated other features in its pigtail standards range that help reduce the frustrations farmers say are often associated with the use of cheaper alternatives.

Brandon Given, a fifth-generation sheep and beef farmer near Raglan, highlights some of the issues.

“The sort of problems that we’ve had in the past with our electric fence posts have been that they rust out, they easily bend or break and don’t last much longer than a year,” he explains.

“The best thing for us living on the coast is Strainrite’s galvanised steel shaft. It’s made out of good spring steel and it doesn’t bend. We have pretty hard conditions through winter and there’s no rust to be seen.”

The company uses hot-dipping in its galvanising process. Wooster says that this provides corrosion protection that adheres better and gives a thicker coating than other alternatives such as zinc-plating, which may only last one to two years.

Farmers have identified sun damage to plastic insulators and fittings as another factor in pigtail standard failure. Strainrite responded by UV stabilising all plastic throughout its pigtail posts range.

The move has been met with positive feedback.  “The plastic out here corrodes in the sun and starts to fracture and short. Strainrite’s UV feature has been great. We’ve had the standards for a year now and all the plastic is still in great condition. I’d definitely recommend them,” says Given.

“The UV stabiliser in the Strainrite pigtail standards is essential because their life is in the elements. Other standards become brittle and shatter over time,” Mulholland adds.
Despite initial misgivings, Wooster experimented once with offshore manufacturing for a line of products. However, the quality was so inconsistent that he resumed manufacturing in New Zealand. Wooster says that it was an important business lesson and confirmed what he had believed all along: he couldn’t control manufacturing overseas and could only be confident of high quality products if he kept manufacturing in-house.

Strainrite opened a new plant last year to keep up with customer demand.