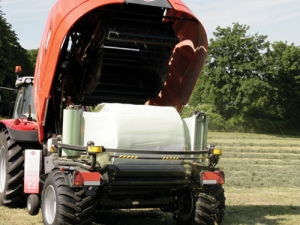 The Kuhn Bio integrated baler and wrapper has been around for some years, gathering a loyal band of users.

It can produce a well-shaped and securely wrapped package with minimum power.

Unlike other combi units that rely on the bale being transferred from the chamber to a separate wrapping table, the Bio forms the bale in an 18-roller chamber where, after completion, the top portion lifts to allow wrapping by a twin satellite system; then the lower six rollers – which have acted as a wrapper table – lower the bale to the ground.

This unique concept results in a smaller machine weighing only 3700kg and needing only 110hp, versus the longer, heavier units that typically weigh 5.5 to 6 tonnes and need upwards of 150hp. Such a machine may suit smaller farmers or contractors who want to make their own baleage but don't necessarily have a big tractor.

Benefits are also claimed for holding bales in the chamber during wrapping: they are said to expand less and require less net or film wrap for the finished product.

For the 2016-17 season the new I-Bio+ sees grass lifted over a 2.3m wide pick-up by five tine bars; this can be specified with optional fixed or pivoting guide wheels for undulating ground conditions. This ability is further enhanced by a pivoting action that allows the unit to oscillate laterally to follow the ground more accurately.

From the pick-up, crop is moved into the bale chamber by Kuhn's Integral Rotor which centres the crop to the chamber width and feeds it through the Opticut 14-blade knife bank; each blade is individually protected in the event of an overload, and they can be used in different multiples for differing chop lengths. New Zealand users may choose to run with seven knives which give a longer chop length, considered better for promoting rumen activity.

As part of the chopping system a drop-down floor allows blockages to be easily released and a hydraulic feed rotor disengagement function cuts feed to the chamber, allowing bales to be netted and released if required.

The driveline uses heavy duty 1 inch and 1.25 inch chains lubricated by a brush system; this and a centrally mounted greasing system (or an optional automatic greasing system) minimise routine maintenance.

Two novelties for the season are, firstly, the IntelliWrap system that uses electronics and hydraulics to monitor the process and allow easy adjustment of the number of wraps and the amount of overlap; and, secondly, a feature that slows the rotation speed by 50%, which allows one roll to finish wrapping a bale should the other break, reducing downtime in the field.

An optional twin roll system can also be fitted to wrap the circumference of the bale, making for tighter wrapping and removal of air; the results are better quality, improved bale shape for stacking and some protection for straw stored outdoors.

Control is via the Kuhn VT50 terminal which oversees all machine functions on its 5.7 colour screen, giving real time display of baling and wrapping at all times.

In a move that appears to have been repeated by many equipment manufacturers, Kuhn confirms it currently working on several autonomous solutions – particularly in the area of feeding.