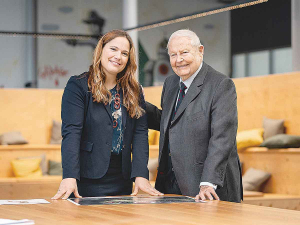 Patriarch Helmut Claas is handing over the reins to his daughter Cathrina Claas Muhlhauser, who takes up the position of chairwoman of the shareholders committee.

At 44 years-old, she becomes the third generation of the family to hold the role.

During his time as chairmen, Claas has seen a rapid expansion – particularly in its presence beyond Europe – with production and sales now located in places like India, the USA, Russia, China and South America. Along the way, the company also acquired French tractor manufacturer Renault in 2003 to add prime movers to its machinery portfolio.

On the product front, during the same period, the German-headquartered company introduced the industry-leading Lexion combine harvesters in 1995 and the Jaguar self-propelled forage harvester ranges, which also holds a commanding position in the market.

Disco with the moves

The latest Claas Disco 10 mowers, incorporating the Max Cut cutter-bar, are available in six working widths from 2.2 to 3.3 metres