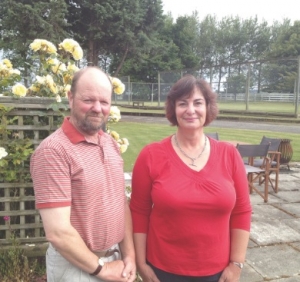 A HILL farm in the west, and a 5000ha station in the east are the latest winners in the annual round of regional Ballance Farm Environment Awards.

BFEA judges praised their “commitment to detail” and use of expert knowledge to steer their business through a period of substantial debt.

Judges also noted use of a Horizons Regional Council Sustainable Land Use Initiative plan (SLUI), which had a major effect on how they run the farm allowing for its natural limitations, including steep contour, varied soils, wind exposure and limited natural water.

“This is an excellent example of adapting outside knowledge to maximise production and manage within some considerable natural limitations, without having a detrimental effect on the environment,” the said.

Ewanrigg was bought by the Hare family’s Tuatahi Farm Partnership (which includes Curwen’s parents) in 1982 to complement the original farm, Tuatahi, which was settled by Curwen’s grandfather in 1894.

Six years ago the Hares made the difficult decision to sell Tuatahi, downsizing to the one farm.

Since, Curwen and Marija, who have three adult sons, have substantially subdivided the property and fenced 7km of steep gorge under their SLUI plan, so nearly 12% of the farm is now retired from production.

Permanently flowing streams are also fenced, and judges praised riparian management and plantings. While natural water isn’t abundant what is available is “very well managed in terms of quantity and quality,” they said.

Stock water is supplied by a two-dam system, the top dam acting primarily as a silt trap. About 75% of water is gravity fed to troughs. A solar-powered system is used to pump water from the dams to a storage/header tank before distribution to troughs.

High stock productivity is achieved with careful grazing management and mixed pastures including chicory and plantain which boost lamb and dairy-grazer weight gains.

Meanwhile on the other side of the North Island, East Coast BFEA Supreme Award winner Smedley Station and Cadet Training Farm was noted for setting and achieving high benchmarks.

“As a working farm Smedley not only practises profitable and sustainable management, it also teaches this ethos to tomorrow’s agricultural leaders,” said awards judges in that region.

Smedley was bequeathed to the Crown in 1919 by Josiah Howard who wanted the farm to be used for agricultural training.

Today the 5054ha (3186ha effective) sheep, beef and deer property near Tikokino, northwest of Waipukurau, is home to 22 cadets who get a wide range of learning opportunities living and working on the property. It’s managed by Terry and Judy Walters.

Last year the mainly rolling to steep hill-country station wintered 28,500 stock units, including 11,500 ewes, 500 breeding cows 365 breeding hinds and 450 velveting stags. As well as being a training facility, it hosts a wide range of visitors and interest groups.

Walters was a stock manager on Smedley prior to his appointment as manager in 2002. Since then the station has consolidated, selling outlying blocks and buying two large neighbouring stations – Onepoto and Ridgelands –which are managed separately but with activities dovetailing with the Smedley block.

The station continues to fence, retire and protect areas of native bush, with 150ha transferred into QE II national covenants in the past decade. Cadets are heavily involved in this bush protection project which instils them with good environmental values.

Judges said Smedley Station owes much of its rich diversity to its close proximity to the Ruahine Forest Park, and the foresight of early management decisions to retain large areas of native bush.

“Hundreds of hectares of retired indigenous bush and well-maintained pastures dotted with totara that have been retained for shade and shelter help make Smedley an extremely attractive property.”

Biodiversity has been further enhanced through the protection of freshwater ecosystems.

“Smedley has banned commercial eeling, many of the property’s waterways are protected and a wetland enhancement project is underway.”

Soils are carefully managed to reduce the risk of erosion, and the station operates a nutrient budget that, judges said, “is informed by excellent record keeping”.

Judges also noted the station’s 180ha of production forestry, which is maintained to a high standard by cadets.

Horses have always been a key part of life on Smedley Station and cadets learn how to break in and train station hacks.

A BFEA field day will be held on Smedley Station on Wednesday March 27.

The Hare’s also won a couple of category awards: the Beef+Lamb New Zealand Livestock Farm Award and the WaterForce Integrated Management Award. A field day date was still to be set when this article went to press.