Challenges ahead for arable 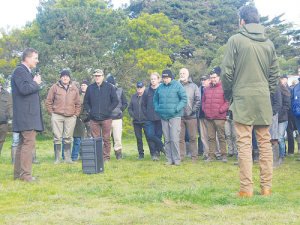 With growing interest in synthetic foods replacing traditional protein sources, the arable industry is well-placed because most of the opportunities are plant-based material, he said.

“Plant-based material [is good in respect of] environmental losses and I think that’s where a lot of the drive will come from – the public’s demand for sustainable and efficient food production.

“The question for us is how does the New Zealand arable farmer fit into that, because a lot of the production will come from the big commodity growers around the world. We can’t compete with them so we’ve got to find the point of difference NZ has in that area.”

Birkett said that over its 20-year history FAR had moved as an organisation from its beginnings concerned with simple crop agronomy.

About five years ago it had started to look at the whole farm system, rotations and how they interlinked. Looking at that big picture had brought big gains, he said, and the strategy for the next few years would be to look wider still.

“We’re now starting to shift to the next area of the whole farm business, because there are components outside the farmgate that are having a big influence on how we operate. We need to integrate those issues into the farming business and address them.”

Opening the conference, Birkett said FAR’s front-footing of the issues would put arable farmers in a position to answer questions asked of them and have the proof at hand.

The issues facing the industry have become far broader, he says.

“As we’ve seen over the last 10 years, climate seems to be changing whether you believe in climate change or not. The fact is the distribution of rainfall is changing.

“We need to understand what those changes mean, how we manage them and whether those changes give us opportunity – perhaps new crops that may be grown in areas where they previously weren’t. And how do we maximise those crops to get the most out of them?

“Markets are changing as well. We’ve got to understand the demands of the markets we’re selling into.

“If we don’t we’re not going to hit those markets correctly.

“There’s a lot of talk now about proteins replacing meat and milk in the marketplace. What is our role there?”

“It’s important that we try to understand what those advantages are and that we front-foot wherever we can. Our international collaborations allow us to do that, and through FAR Australia we are able to get access to research we would never get done here because of the scale of our industry.”

He predicted further gains from agronomy improvements of 1-2% but 5-10% gains from market opportunities.

Birkett, a Leeston cropping farmer with a recent but unofficial world record wheat yield to his name, also addressed conference goers during a field trip to the nearby shore of Lake Ellesmere/Te Waihora.

He recommended farmers form community groups to deal with issues in their areas, explaining how he and his neighbours formed a group to liaise with ECan.

Among other achievements, their lobbying had helped simplify Ecan’s environmental compliance paperwork.

Meanwhile, the country’s 2500 arable farmers were being urged to vote ‘yes’ in the upcoming referendum to confirm FAR’s mandate to levy its members for the next few years.

Birkett expected the referendum to pass but said it wasn’t just a rubber stamp. "lt's always good to check the pulse.”