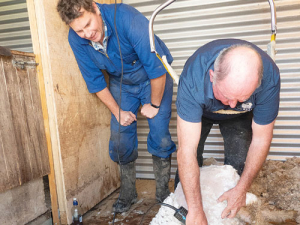 Dunsandel farmer Michael Woodward may be Federated Farmers North Canterbury dairy chairman but his real passion is the angora goats he inherited from his father John.

Hohn Woodward, of Pukekohe, is a pioneer of the mohair industry: he set up its pool marketing system about 1982, is a board member of Mohair Producers NZ and now manages marketing of the North Island mohair clip.

Michael Woodward, meanwhile, is sharemilking on 300ha at Dunsandel with his wife Susie.

They do not own the farm but they own the 2ha homestead block where they run a menagerie of goats, dogs and chickens. Their angora flock stands at 34, having started two years ago when they bought in 10 in-kid does.

John Woodward recently visited to give his seal of approval of their efforts and to shear nine chosen animals in preparation for the Canterbury Show in November.

“I’m still mastering my technique so that’s why we bring the expert down,” Michael says with a grin.

Although it is hard to make money off a small flock, he says angoras are “certainly” a part of their future, probably on a hybrid farm with dairy cows.

“We see opportunity there in an industry that has good payout again.”

Michael says goats and cattle share no crossover diseases and would complement each other, with goats eating the “rougher stuff” while leaving the “good stuff” for the cows.

Goats have some husbandry challenges compared to sheep, such as the need to provide shelter because of the lower lanolin content in the fleece. Goats also have some drench resistance problems but these can be addressed by rotational grazing with cows.

On Michael’s farm the goats and cows are run as two separate enterprises.

“The only time these goats have gone out on the farm is just to chew out the calf paddocks and clean them up; otherwise never onto the grazing platform,” says Michael.

“But if we really wanted our goats to perform, grazing them on a dairy platform where the pasture’s kept at a high quality all the time would definitely help the growth of those animals. Until we get our own property we don’t get to make that decision.”

Michael Woodward likes to get involved outside the farm gate and has already joined the Canterbury Mohair Producers Board. He believes sharing their dairy experience will be valuable to the mohair industry, particularly the discipline it would bring in evaluating the animals’ performance and breeding.

“We tend to keep a lot more records in the dairy industry,” he says.

“The finest mohair might get paid the most per kilo, but if you have an animal that clips twice as much off it, then ideally you’d want to breed from both bucks eventually and you’d cross over and get the volume with the quality. At the same time you don’t want to take away from the frame of the goat itself because it might not survive long-term.

“We’ve got an example of two bucks out there that are very much like that,” says Susie. “One clipped a big clip but lower quality than the other one; the other one a finer quality but it’s also a finer-framed animal so we’re in two minds on both of them. There are good bits to each of them.”

No acting the goat

John Woodward is an enthusiastic salesman for mohair fibre, pointing out that it both dyes and washes better than wool.

He is currently developing his own line of mohair clothing.

Woodward says the mohair market is booming, with prices for the most recent pool payment 35% up on the same time last year. The average price across all lines (including stains) was $22/kg, up from $14. In the main lines, 36-micron stood at $20 and 23-micron superfine at $40.

New Zealand has about 120 Angora farmers, ranging from lifestylers with about 10 goats to the biggest, with 1400. They produce about 30 tonnes of mohair a year, most of it exported to China, Taiwan and Italy to be made into clothing, hand-knitting yarns and rugs.