Easy lambing with lambs that grow 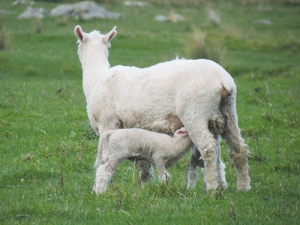 Tweed's been 30 years on his present farm, a mix of river flats and steep country and typically dry in summer.

He's experimented with a variety of terminal sires over the years, but has settled with the Southdown which he puts across up to 500 ewes in his B flock and all his ewe hoggets.

Tweed says the Southdown makes for easy lambing and what he likes most is that the lambs grow well and come weaning time he has a good product to sell. He reckons with some other terminal sires he's tried, while the lambing percentage was good the growth rate was not and that's what counts!

Tweed says this is especially so with the lambs from the ewe hoggets.

"My place is steep and gets hot in summer. I notice that the Southdown rams and their progeny do well in this environment. I love the Southdown because they just keep on growing," he says.

He selects his B flock ewes based on how the animals look, not on their age. As for weaning, this depends on the state of the lambs.

"The first lambs are generally weaned in mid-December, a mixture of those put to the terminal sire and those from the commercial flock. I don't lamb an early mob as some people do.

"For example, last year I weaned after new year. I don't farm by the calendar, I farm for the betterment of the animals."

Tweed says the Southdown ram produces a "good meaty sheep" and he's especially pleased with the lambs from the hoggets. He reckons the weight these lambs put on sets them aside from some other terminal sire breeds available.