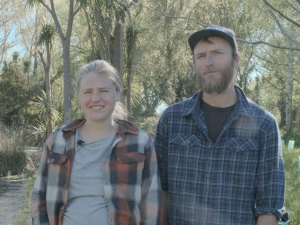 Organic farmers Dominique Schacherer and Logan Kerr have started to create their dream of regenerating part(s) of the Irwell River thanks to a chance meeting with Ellesmere Sustainable Agriculture Inc (ESAI) chairman Tim Chamberlain.

“When we moved here over a year ago, we had a dream of regenerating the river, but starting the project by ourselves felt really overwhelming,” says Schacherer.

“So we were really excited when we heard from Tim about Project Tinaku which supports farmers to regenerate the riverbanks and it all happened really quickly.”

Tinaku is the flagship project of ESAI, which secured funding through the Jobs for Nature initiative from the Ministry of Primary Industries, to help farmers regenerate their waterways and create employment and education opportunities in the district.

Project lead David Hewson and project coordinator Johanna Blakely visited the farm and developed a plan for two distinct sites, one along the river and one around a natural backwater, with suitable native planting species

“By having two different types of sites, we were able to create a range of wildlife habitats and maximise the functions of the plantings, such as shading the waterway, stabilising the banks, and filtering any runoff,” says Blakely.

Before the planting started in spring, Kerr, Schacherer and their team put in the hard yards clearing the sites of overgrown willows, poplars and blackberry in preparation for planting.

Project Tinaku contractors then came in to prepare the sites by removing grass and other herbaceous weeds in the areas directly around where each plant would go.

“Because it is an organic farm, this was done manually rather than with sprays,” explains the Project Tinaku Coordinator.

In September and October the contractors planted 1600 native plants at the site, lining 250m of the river’s edge and covering a total area of 0.4 ha, including 0.1 ha of re-established wetlands.

“We were not expecting it to get this far really quickly, which we are pretty stoked about,” says Schacherer.

“To get something established gives us a lot of confidence to continue by ourselves,” he says.

The organic farmer says Project Tinaku has had huge benefits for the Ellesmere region.

“It's great to see that it is not a government-directed program, but local people taking initiatives themselves to make this happen, which is awesome.”