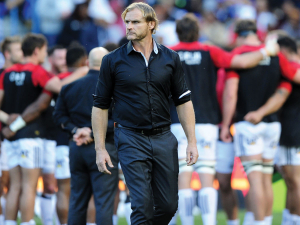 Successful Crusaders coach Scott 'Razor' Robertson shared some of the secrets of the culture that created the Crusaders dynasty, including their methods to handle setbacks and stress.

Make sure you have someone to talk to when life gets tough.

That was the key message from Crusaders coach Scott Robertson and some rural mental health advocates at a packed gathering of the Ellesmere farming community recently.

Ellesmere Sustainable Agriculture Inc (ESAI), with support from the Ministry for Primary Industries, invited its members and community to listen to four speakers sharing their experiences around leadership, stress, anxiety and depression and the strategies to cope with the pressures life creates in rural communities.

A capacity crowd of nearly 100 farmers, their families and their neighbours were captivated by Robertson sharing some of the secrets of the culture that created the Crusaders dynasty, including their methods to handle setbacks and stress, which according to Robertson apply to both the rugby field as well as the farm.

Robertson explained how he built his coaching career on doing the hard yards, learning from others who have gone before him and building a support group he can lean back on.

He said that earlier in his career he used former Canterbury coach Rob Penney as his sounding board. These days he phones former Crusaders coach Robbie Deans for mentoring.

"You always need to have a plan or a person to call when things get difficult," Robertson told the audience at the Lakeside Soldiers Memorial Hall near Leeston.

He explained that each person responds differently to adversity.

"Some players get angry, some get quiet and some withdraw," said Robertson who stressed how important it was for all of us to recognise and understand how we react to stress and respond accordingly.

"Instead of withdrawing or getting angry, it is better to take action. Talk to someone get a team around you, stay connected. If you stay connected, you can stay on course."

After answering questions about rugby as well as mental health, the coach handed the floor to three other speakers who each support the rural community and their mental health.

Geoff Spark, a supporter of the Farmstrong movement, shared his personal tale of dealing with incredible stress after 2,500 cattle were culled due to Mycoplasma bovis.

Rural sports MC and commentator Craig 'Wiggy' Wiggins from Ashburton then spoke about the unexpected demand for a weekly drop-in zoom call he started for farmers during the first Covid lockdown.

The weekly online gathering evolved in a national campaign to encourage farmers to open up and share their worries.

Wiggins said that the 'Lean On A Gate, Talk To A Mate' campaign aims to recreate some of the traditional opportunities when farmers used to connect at the saleyards or in the pub, which may not be happening as often these days.

He explained that when people get down, they struggle to remember the good times.

"So it's important to connect to someone from the past, so you can remember those happy memories."

The final speaker of the evening, Elle Perriam, spoke about her personal journey of depression after her partner took his own life, and trying everything "to get rid of the pain".

She explained how the depression eventually helped her to understand the mindset of people considering taking their own lives and helped to create Will To Live New Zealand which helps farmers with their mental health struggles.

Perriam, who grew up in Haast, but now lives in Leeston, has reached over 15,000 farmers through her Rural Change Programme in recent months and has raised funding for farmers to access private counselling, instead of waiting for months through the public health system.

She encouraged all farmers to reach out if they wanted to improve their well-being, even those who don't have urgent challenges.

ESAI event organiser Jo Fearn said the night has been a huge success and the ESAI team were stoked with the big turnout.

"Mental health is one of the biggest challenges in the rural sector and creating a night like this to learn and to connect with your neighbours is incredibly important."