Ewes give landslide the slip 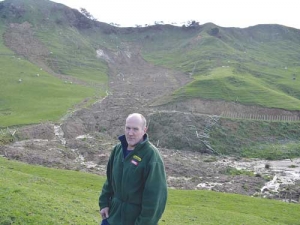 Taranaki farmer Graham Fergus woke up to find 50 slips on his farm.

It was a Saturday afternoon and it had been raining for two days; Taranaki farmer Graham Fergus decided to move his ewes on a hilly paddock.

The flats on his 272ha sheep and beef farm at Douglas, 60km southeast of New Plymouth, were already flooded. After herding the ewes through the gate, Fergus returned home; on Monday morning he returned to check on the ewes and was greeted by the largest slip he had ever seen.

Tonnes of rock and soil had crashed down a hill, tearing fences and uprooting pasture. There were 50 slips on his farm alone; a neighbouring property had 200.

Fergus counted his ewes, accounting for every animal.

He told Rural News he believes the slip occurred before he moved his ewes to the area.

“Because I put them through the gate and went away, I did not see the slip. It would have been a different story if the slip had come down while the ewes were grazing on the hill.”

The floods on June 19-21 were among the worst in Whanganui, Taranaki and Manawatu.

Fergus was one of hundreds of farmers in eastern Taranaki affected by the floods; most farms in the affected areas lost land, fences and riparian planting from streambank erosion and overflowing rivers.

He estimates damage on his farm exceeds $20,000; about 350m of fences are flattened and 100 hours of digger work is required to clear rocks and soil.

These are expenses, he can do without, he says. “It’s a big hit -- money you can’t do something else with.”

Fergus has owned the property for 11 years; he has been a farmer for 26 years and previously worked as a labourer.

He acknowledges bad weather is part and parcel of farming. “That’s one of the joys of being a farmer; you can’t change that.”

Repair work on his farm is underway; helped by Taranaki Regional Council, Fish & Game and Queen Elizabeth II Trust he has begun replanting and re-fencing protected areas on the farm.

He hasn’t touched the biggest slip on the farm yet though.

He plans to make temporary fences with wire netting and waratahs; rock and soil will be pulled down into the gully.

“I haven’t yet got around to doing a lot because I wanted to consolidate the slip; there’s still a lot of loose dirt in there. If we get another heavy rain some of that would move again; but I will get onto it very shortly.”

He says the Taranaki Regional Council is providing plants free to affected farmers.

“I haven’t been able to put ewes in a paddock and know they’re going to be there and save grass; with no fences they can go wherever they like.”

But he acknowledges that damage on his farm is nothing compared to other farms nearby.

“One farmer has over 200 slips and one has called in a contractor and spent over 300 hours with the drain digger.”

The North Island flooding in June is estimated by the Government to have cost the economy $270 million.

The council has set aside $395,000 to help with riparian planting to prevent soil erosion; it will supply grass seed and help with environmental fencing repairs.

Getting back to the plan

About 66% of the region’s privately owned hill country farmers have a farm plan, he says.

However, it was tough to see good farm plan work destroyed in a few days by June’s extreme weather. Some of the work had taken years.

“We want to help where we can, so the storm recovery package is available to all farmers with plans, or those who want to get a plan and work with the council to help them recover from the storm damage.

“Farmers’ and landowners’ environmental work is vital to caring for Taranaki, ensuring farm work and living off the land is sustainable.”

Taranaki ‘people power’ is modelling how all Kiwis should get out there and do stuff, says the regional council.

Fonterra has temporarily shut down its Edgecumbe site, in Bay of Plenty, as a result of flooding.