Farmers come ‘FAR’ and wide to open day and the heat 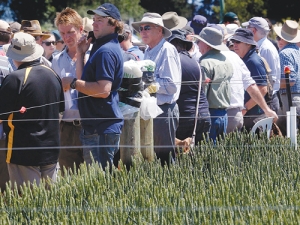 It was grassroots intelligence for farmers last week, when the Foundation for Arable Research (FAR) opened the gates to its Chertsey trial farm in Mid Canterbury.

Nearly 500 farmers from around New Zealand and Australia spent the day attending 12 seminars at the Arable Research in Action (ARIA) 2015 open day.

Farmers who braved the 34 degree heat had unfettered access to the latest information from FAR's research projects – with scientists and experts, some who came from Europe, present for Q&A sessions after each presentation. Sessions ran for 30 minutes and then were repeated in the afternoon to enable farmers to get the maximum benefit from the day.

One of the most popular sessions was by Thor Gunnar Kofoed from the Danish Seed Council. His seminar was 'how can Denmark capture market share in the world seed market while they have the world's strictest environmental laws?'

Kofoed described the regulations Danish farmers must operate under and some of their ingenious solutions.

He explained how Danish farmers were restricted to using only 3L of glyphosate per hectare per year and not being able to respray the same land for three years. So farmers and sprayers had developed sensors to allow them to spray only weeds in a paddock not grass, thereby maximising the efficiency of the glyphosate.

Danish farmers were also instructed to remove 50% of nitrogen from their crops, so they switched to using ammonium sulphate as a fertiliser instead of urea. This was put direct into the ground – rather than sprayed – as Kofoed explained that you lose 20% to the atmosphere in emissions when it is sprayed.

Kofoed was concerned that NZ appeared to be heading towards making some of the mistakes Denmark did in the early 1980s. He hoped that farmers would pressure regulators here to look overseas and learn from the likes of Denmark.

During the question and answer time he was challenged on the use of subsidies in the European Union. Kofoed responded that in Denmark he received about 800 Euro/ha in subsidy, but the cost of the bureaucracy to meet the environmental laws almost equalled the subsidy. He said he would prefer no subsidies and no bureaucracy.

He said in order for Denmark to capture the market share and be cheaper and more efficient they had to get inventive. "When you are limited you have to think of other ways to achieve."

Another popular session was 'building on-farm diversity' with native plantings, hosted by Steve Brailsford and Melanie Davidson. This pair extolled the benefits of using natives to replace pine shelter-belts, mainly as a way of providing an environment for natural pollinators and natural insect predators to help arable crops thrive.

The plantings need to be structured with three layers of canopy, sub canopy and ground cover. But importantly they need to use plants from the local area as these plants will have the genetics developed over tens of thousands of years to cope with that particular environment.

Costs saving tips were offered like contract growing with nurseries to lower the price of plants to about a third of normal retail.

Arable farmers were issued a challenge to help their livestock farmer colleagues through the drought by collaborating together and ensuring everyone had enough feed.

New Zealand meat businesses are being asked to contribute to a global study on gender equality.

New Zealand’s largest one-day show has been cancelled due to Covid-19.