From receivership to award finalist 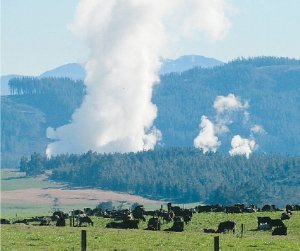 TAUHARA MOANA Trust dairy farm near Taupo is a long narrow block located between Mt Tauhara (Maunga or mountain) and Lake Rotokawa (Moana - water). It’s one of many large-scale dairy farms in the Broadlands area where Mt Tauhara forms an imposing backdrop, as does steam rising from Lake Rotokawa and adjacent geothermal sites. The farm is part of Ngati Tuwharetoa and Te Arawa’s ancestral lands, the tribes to which the trust is affiliated.

It’s a beautiful setting, and the performance of Tauhara Moana is equally brilliant, propelling it into contention as a potential winner of this year’s Ahuwhenua Trophy.

The shed is a 66-aside herringbone with revolving breast rail making for better cow flow.

Governance comes from a board of seven Trustees, with a team of rural professionals advising them. Up to 13 staff work on the property, managed by 50/50 sharemilkers Olly and Kim Gibberd.

The land was originally in sheep and beef but was converted to dairy in 2006 and leased to Plateau Farms, part of the now defunct Crafar empire. Crafar Farms’ receivers took it over, before the Trust regained full ownership in March 2010.

Fonterra shares were relinquished and it became a supplier to local Maori dairy processor Miraka. The trust is one of Miraka’s biggest suppliers.

Farm advisor Mark Johnston, like trustees, says he was happy with the way the farm was being run under the Crafars, but it was the arrival of the receivers that caused the problems.

“They had basically wound down everything: no fertiliser had been applied; no supplements made; no proviso made for the winter and the cows were light so we had to buy in feed, mainly PKE.

“On top of that, it had been a dry summer. It’s an unfortunate that under receivership law the receivers don’t have to live by any of the warranties or covenants in a lease deed, so they just ran the property as they saw fit.”

With the farm back in hand, Tauhara Moana Trustees developed a strategic plan to get it back on its feet, fast. They retained Olly and Kim Gibbard, highly regarded as excellent managers of large-scale dairy farms, and hired a team of top advisors.

One trustee, Topia Rameka, was heavily involved in bringing the farm back to its potential.

“The trust received an asset that had been under resourced and underinvested in for a number of years… We weren’t afraid of making hard decisions and were willing to take an educated risk that has ultimately paid off,” he says.

Fertiliser went on, 200ha of new grass was sown, and PKE and other supplements used to get cows back to target condition. Johnston says the re-grassing programme has continued a pace, with more ryegrass and recently some lucerne, which appears to suit the dryland pumice country, also going in. Resurgence of browntop is a threat so a summer and winter crop sequence is used to clean the ground before going back to pasture.

Rameka says Maori values are critical to the success of the business.

“They are the guiding lights in terms of our business parameters and  how we operate.”

The farm is the first dairy farm in the Waikato River catchment.

“We take that responsibility very seriously. We are very aware of our role within the community and impacts upstream have impacts downstream. Whilst we are wanting to develop and grow our asset to its full potential, we want to do that in a way that minimises or eliminates any potential harm to the environment down stream.”

Nitrogen leached is just 23kg/ha and the aim is to keep it at that while pumping up production. Rameka says they are already using new technologies and are focussed on science and innovation to achieve a balance between high production and kaitiakitanga.