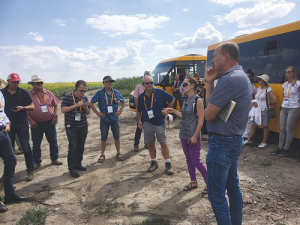 NZ and Australian farmers visiting a farm between Odessa and Kiev in Ukraine; Eric Watson is front centre in shorts and a dark blue top.

They joined Australian growers in a 30-strong group on a two-week grains knowledge tour led by agribusiness banker Rabobank.

The bank drew on its EU client and industry networks, taking the farmers from Amsterdam to Kiev. This was the bank’s second grains tour; last year it took a group to the US Mid-West grain belt.

Watson grows a variety of crops on a 490ha spray-irrigated property at Wakanui. He last visited Ukraine ten years ago.

“In 2008, I spent four days driving around Ukraine looking at arable farming with a friend who was looking at investing there,” he said. “I’ve been keen to go back for a while to have a look at what’s changed there.”

Travelling to Kiev, Odessa and Mykolaiv in Ukraine, the tour included visits to Kernel, the largest crop producer in Ukraine with 560,000ha of crop sown annually, a sunflower crushing plant and port facilities.

Ukraine averages 80 million tonnes of grains and oilseeds each year, 45mt of it exported.

“Most of the land that was lying idle when I was previously there is now in arable production. Their agronomy has also improved immensely, increasing yields by about 50%, plus marked improvement in their port facilities.

“And the sunflowers: ten years ago I hardly saw a sunflower and now it’s their second-biggest crop; they’re the biggest producer of sunflowers in the world.”

“Their infrastructure and road network could be improved, and they have issues with corruption and the structure of land ownership. But if they can make progress in these areas they could further ramp up their production and exports.”

On the western European leg of the trip the tourists visited Amsterdam and Utrecht in the Netherlands, then Cologne, Zweibrucken, Frankfurt, Hamburg and Berlin in Germany.

Watson says the intensification of crop growing in the Netherlands was mind-blowing, as was the high cost of land.

“There’re only small areas available for crop growing and the cost of land is high. Their land grows mainly a few vegetable crops -- potatoes, onions and carrots -- which to me appeared hard on soil structure.

“In New Zealand, and on my own operation, we’re fortunate to have larger areas of land so we can run a diverse crop rotation and maintain the quality of our soils.”

Watson was captivated by the “colossal” flower markets outside Amsterdam. “It was fascinating to see how they have incorporated technology and automation into the auction process.”

Watson says highlights of the German segment of the tour were visits to the John Deere factory in Manheim, the Bayer CropScience headquarters in Monheim and the port tour in Hamburg, including “fantastic access to the loading facilities and the big container ships”.

“The size and scale of the export facilities was phenomenal with huge tonnages moving through the port. At times we were within 5m of container ships loading grains. You wouldn’t get that type of access here in New Zealand and it was interesting to watch close up.”

Rabobank NZ chief executive Todd Charteris said the prompt for the grains study tour was the rising influence of the Black Sea region in global markets: in the early 2000s it had no more than 10% of the global wheat trade; today it has 40%.

“We wanted to give NZ and Australian arable farmers a chance to see for themselves the potential of Ukraine. With plenty of top quality arable land, a good climate and improving farming practices, it’s not hard to see why Ukraine is growing its dominance in the global grains and oilseeds market.”

Rabobank will run study tours next year to various countries and will host tours in NZ, Charteris said.

“The tours provide a platform for like-minded farmers to share knowledge and compare farming practices to improve their own farming operations. It’s clear to the bank that farmers want to take part.”