Kikyu performs as well as ryegrass 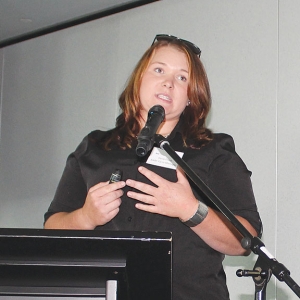 Full results of the study, now winding up, will be given at a final field day in late May or early June.

Kikuyu is rife in Northland and the study has been aimed at finding out whether farmers should try to get rid of it and establish conventional pasture, or learn to manage it.

The study by the Northland Dairy Development Trust and DairyNZ has been comparing ryegrass and kikuyu systems to look at practical and profitable options.

Karla Frost has been managing the 84ha NARF farm for 18 months. It milks 250 cows split into two herds with a stocking rate of three cows/ha.

Frost says in the first four years of the trial three dairy farmlets were compared: a ryegrass based farmlet, a kikuyu mulch farmlet and a kikuyu farmlet without mulching.

“We put this down to the management team deciding to grow turnips on the ryegrass farmlet which meant it provided the farm with the necessary food source to get through the dry months when the kikuyu farmlet had to rely on supplements. Also because of the dry weather the kikuyu did not get a chance to grow until late April.”

The 2013-14 results showed similar production and profit between both herds. That year they grew turnips on both farmlets and, due to the drought, fed a lot of supplement so it probably didn’t give a fair representation of the actual difference between the pasture based systems, she says.

This season to date they have seen very similar production and profit. They have used a lot less supplements than for previous systems. They have had some good rain and the kikuyu grass is growing. “So it will be interesting to see how the rest of the season plays out and it should give a good representation to finish the kikuyu based pasture trial at NARF,” says Frost.

Overall results are showing there is little difference in production and profit if each system is managed right, however the kikuyu remains more sensitive to management and is still dependent on the Italian ryegrass also being drilled during autumn.

Northland Dairy Development Trust member Peter Flood says the NARF farm itself is owned by all Fonterra dairy farms and is a great system for farm system type trials. They surveyed farmers and the big issue that surfaced is how to reduce the reliance on imported feed; for instance what would happen if they could not buy palm kernel.

For the next study, the proposal is to split the herd and farm into three. System one would be the existing system of 20-30% of imported food, system two would be no imported food and filling the gaps with cropping with less than 20% of the farm in the crop, and the third system is no imported food with a lower stocking rate, Flood says.

The first is the existing system. With the second model the challenge will be to build a profitable but robust system with no imported food. Proposed crops include maize, turnips, herbs, chicory and plantain and there may be others. Modelling is being done through Farmax. The key one will be stocking rate.

The new learning will be managing feed supply risk, testing and developing specialist crop management, measuring the impact of reduced use of imported feed and measuring environmental impacts. After three years they will have good answers and answer the question “can we farm without PK?”

They have DairyNZ support, have also applied to the Sustainable Farming Fund and are looking for other sponsors. Trust chairperson Penny Smart says the trust hopes to extend its research out on to other farms. The trust was formed in 2005 and the main purpose is to initiate, manage and extend research for the Northland dairy industry.