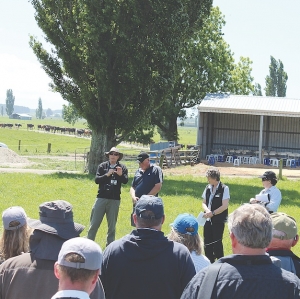 IN THE 2007/08 drought Wayne Reynolds’ cows chewed covers down to four clicks and average cover across his 154ha effective farm was just 1190kgDM/ha.

Production that season dropped from 1200kgMS/ha to 1000kgMS/ha and despite immediately reseeding nearly half the farm, and a quarter of the farm annually after that, it didn’t recover.

“Milksolids were static despite our best efforts, bringing feed in and renewing the pasture of the farm,” he told the New Zealand Grassland Association’s conference in Tauranga earlier this month.

Many others in the area were suffering similarly poor results and were at the point of despair. It was only after a change in endophyte, and perhaps more importantly a rethink of grazing policy, that production started to recover.

In 2010 they switched from seed with AR1 endophyte to AR37 or NEA2 endophyte lines, and, having become a Dairy NZ pasture improvement focus farm, made a strategic change to their pasture management. Peak stocking rate was cut from 3.6 cows/ha to 3 (at 430kg liveweight equivalent) and a minimum residue limit of seven clicks on the platemeter set.

Reynolds credits Agriseeds’ Graham Kerr with persuading him to make pasture the priority in the management system, though he admits even after “robust” debate he still didn’t like the message. “It added complexity to our systems.”

Previously, pasture and stock had been the tool to buffer climatic volatility, allowing cow intake, performance, and pasture residuals to drop if necessary. The rule had been six clicks on the platemeter before supplementing for fear of substitution and to maximise response to feed.

His pasture problems were compounded by well-drained peat soils providing the perfect habitat for black beetle. “We felt powerless to prevent the black beetle damage we were seeing,” he recalled at the conference.

Production slipped a little in 2012/13, but it was in the face of a one-in-seventy-year drought and supplement was also pared back to 3.3tDM/ha. At 1271kg/ha it was still their second-highest production ever (see table) and pasture bounced back like never before.

“There was a spectacular recovery after the drought broke, in contrast to previous droughts when the recovery was slow and painful.”

Previously they’d blamed the potential for very dry peat soil to be hydrophobic – ie repel water – for the slow recovery.

Following last summer’s drought only 3-4% of the farm’s pasture needed renewing, so not only was recovery faster, there was a substantial cost saving on previous recovery efforts too.

While Reynolds credits the Dairy NZ focus farm initiative for helping him find solutions, he’s critical of the time it took the levy body to respond to his and other producers’ concerns in the area during the years after the 2007/08 drought.

“For a while we were on our own. There was very little research for our environment. It took a while for it to be recognised that North Waikato was suffering…. We had at least two seasons of lost opportunity. Other areas had recovered from the drought; we hadn’t.”

While that had a big impact financially, the biggest hit was emotional.

“Now, with the coming summer predicted to be dryer than average, I can face that much more confidently and know that I have options up my sleeve.”

*See www.grassland.org.nz for all papers from this year’s, and previous years’ conferences.