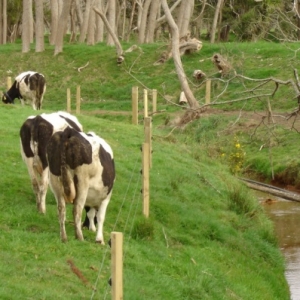 THE FINDINGS OF the Parliamentary Commissioner's water quality report should serve as a call to action for farmers, says a major natural fertiliser company.

Keith Jackson, general manager of Viafos Ltd, says recent Government reports and increasing regional council regulations mean farmers need to ensure accurate nutrient budgeting of nitrogen and phosphorous. "Like anything, it's not the report itself but what we do with the information that counts."

"Our soil is our greatest asset and the key our livelihoods. A constant barrage of low nutrient chemical missiles eventually has an effect."

Jackson says natural nitrogen products, nitrogen inhibitors, liquid applications that allow more urea to be made available are on the market and can either assist the current urea over application or be an alternative to it.

"The same applies to phosphates, Viafos guano phosphate simply does not have the detrimental effects on the environment like chemical super phosphates, runoff, leaching, soil fixation are minor in comparison.

"The main reason is that natural guano phosphates are non-water soluble phosphates, relying on soil biology for transportation to the plant root zone where it is available on an as required basis rather than an uncontrolled basis, making it much more efficient than chemical phosphates where 75% of the phosphate can be lost. "

Jackson says while chemical phosphate applications are not cheap, they are being oversold in many cases where they are simply not needed.

"Good plant root length and a healthy soil that can more adequately manage drought and heavy rainfall should be the focus for farmers, so it is encouraging to note the progress of change in farmers wanting to learn and build knowledge."