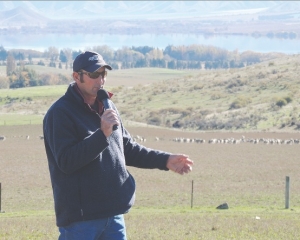 Mention the word ‘conversion’ in the context of land use, and most people assume you’re talking dairy conversion. But now the term is being applied to another trend: lucerne conversion. Andrew Swallow reports.

DRYLAND SHEEP and beef farmers Gundy and Lisa Anderson have a new spring in their step, and it’s largely thanks to one crop: lucerne.

As they earlier this month relayed to a CRT-organised field day on their farm, Bog Roy Station,  Omarama, four or five years ago they “were doing a fair bit of soul searching.”

“We were going backwards, spending a 100 days every winter feeding everything. We were even feeding cows a bit,” Gundy told the crowd.

They were also embroiled in tenure review and “haemorrhaging” money on an irrigation consent renewal, spending too much time in Christchurch lobbying bureaucrats and talking to lawyers.

But over the next year “a whole lot of little events” came together which set them on the path of what scientists and technical support people are starting to call “a lucerne conversion”, not that the Andersons were unfamiliar with the crop: they were growing 30ha of it already. However, some expert advice revealed their cultivar wasn’t the best suited to the seriously cold winters the farm gets.

“We started putting in one with a bit more cold tolerance and it started to work really well.”

How they were managing the crop also changed: instead of cutting first then grazing later, if there was enough regrowth, they now graze in rotation, and take cuts by dropping out a paddock when growth gets ahead of stock intake.

Putting lucerne or lucerne cocksfoot mixes onto some of the station’s limited irrigated area has also proved a winner.

“Our irrigated paddocks were all in older ryegrasses and we were having a hell of a job keeping our Merino hoggets clean on it…. We decided to whack in some lucerne and see what that was like under irrigation.”

The lucerne cocksfoot mixes are on slopes close to the shores of Lake Benmore, the thinking being the cocksfoot will help mop up any surplus nitrogen leaked from the lucerne.

On dryland areas lucerne has been contour sown, avoiding rocky knobs and boggy hollows. The crop makes the most of moisture that runs off the humps, while unsown areas provide fibrous forage and useful shelter, particularly at lambing.

Anderson says reading an article about how Marlborough farmer and lucerne pioneer Doug Avery used contour sowing in a similarly dry environment “was a bit of a light bulb moment.”

“The only difference here is we have a harder winter.”

Another eye-opener came on an Otago Merino Association exchange to South Africa.

“They were doing 120-140% lambing [with Merinos] and lambing three times every two years. It’s estimated the average here